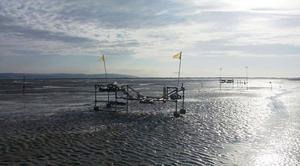 A recent survey in the River Dee estuary of bedforms – the patterns of ripples and hollows that moving water creates on the seabed – has provided a comprehensive and valuable set of data for scientists at the National Oceanography Centre and several UK universities.

The muddy and sandy habitats provided by estuaries are very important for the ecology and economy of the UK, providing food for many species of birds and fish, protecting the coastline from the erosive forces of the sea and acting as a filter where pollutants from the rivers are captured and eventually degraded.

The work was carried out as part of the as part of the COHBED project (Realistic Sedimentary Bedform Prediction: Incorporating Physical and Biological Cohesion) which aims to increase our understanding of bedforms in a mixed sediment estuarine environment, subject to biological activity, through laboratory studies and fieldwork. COHBED involves multiple research institutions – including NOC – and is led by Bangor University. It is funded by the Natural Environment Research Council (NERC).

For the fieldwork, a team of researchers from NOC and the universities of Bangor, Hull, Plymouth and St Andrews spent two weeks in May surveying an area near Hilbre Island in the Dee Estuary, taking measurements in the inter-tidal and sub-tidal regions. A wide range of techniques was used - from laser scanning and cryopreservation of samples, to optical and acoustic instrumentation.

To record the morphology of the site a high resolution GPS survey was undertaken and a laser scanner used to image the bedforms. Samples to determine the biological properties of the sediment were frozen with liquid nitrogen for laboratory analysis of the bacteria, carbohydrates, proteins, chlorophyll and microphytobenthos.

To look at the depth of mixing pits were dug and cores taken. In situ frames were used to deploy acoustic and optical instrumentation measuring the hydrodynamics, suspended sediment and bedform development. In the sub-tidal region multi-beam sonar and Acoustic Doppler Current Profiler were used to survey the seabed surface and hydrodynamics.

The weather was recorded by the Liverpool Bay Observatory station based on Hilbre Island.

The range of methods used has provided a comprehensive data set to enable the study of bedforms in a complex estuarine environment.