Imaging the molten rock beneath an active volcano 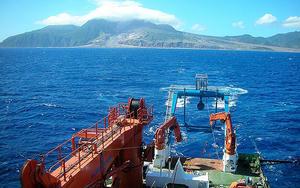 University of Southampton researchers based the National Oceanography Centre, Southampton, with colleagues from Bristol and Penn State Universities, have produced the first image of the magma chamber (body of molten rock) beneath the active Soufrière Hills Volcano on the island of Montserrat in the Caribbean.

The group used seismic waves to detect the physical characteristics of rocks deep underground. Seismic waves travel at different speeds depending on what the rocks are made of and how much they have melted. The wave speed in magma is lower than in solid rock, so the presence of molten rock results in regions of lower wave speed. This property provides a way of mapping concentrations of magma in places that cannot be directly sampled, several kilometres beneath the Earth's surface. Magma chambers are notoriously hard to image because seismic waves tend to avoid materials with lower wave speeds.

The researchers used seismic waves generated by an artificial seismic source towed in the sea around Montserrat by the research ship RRS James Cook and recorded on over 60 seismometers, deployed on the island. Special under-water seismometers, that can withstand very high pressures, were also deployed on the ocean floor around the island. The results were analysed to obtain a three-dimensional image of the region beneath the volcano to depths of up to 7.5 km below sea level. The image revealed a large region of low velocities at depths of 5 to 7.5 km which corresponds to the magma chamber feeding the current eruption.

Lead author and recent Southampton PhD graduate, Dr Michele Paulatto says “Because seismic techniques always produce blurred images, we also used a computer model of magma chamber formation to see what it might really look like. Our model indicates that the part of the chamber imaged has a volume of about 13 cubic kilometres and that it has grown over hundreds or thousands of years.”

The work is based on data collected during the SEA-CALIPSO experiment, a collaborative project involving researchers from the University of Southampton, the University of Bristol, Penn State University, Cornell University and the University of Auckland and funded by the USA National Science Foundation, the UK’s National Environment Research Council, the British Geological Survey, the Foreign and Commonwealth Office and Discovery TV.

The results have been published in Geochemistry Geophysics Geosystems.