Human activities are the main driver of ocean warming and acidification 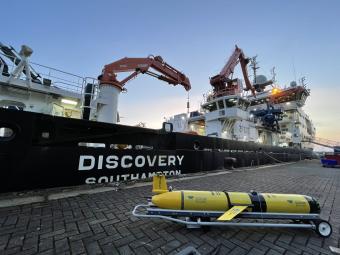 The Intergovernmental Panel on Climate Change (IPCC) has today (9 August 2021) released its next report; the Working Group I contribution to the Sixth Assessment Report (AR6).

National Oceanography Centre (NOC) scientists Prof Stephanie Henson and Dr Catia Domingues were lead authors on the report, which assesses the physical science basis of climate change, providing the latest assessment of scientific knowledge about the warming of the planet, the impacts on climate systems and projections for future warming.

The headline findings of the report show that there is no longer any doubt that human activities are causing climate change with recent changes in the climate being widespread, rapid, intensifying and unprecedented in thousands of years. In fact, human-driven changes occurring in the ocean now, such as melting ice sheets, sea level rise, ocean warming and acidification are likely irreversible for thousands of years, even if emissions were stopped tomorrow.

What’s more, human activities have resulted in the Arctic warming at more than twice the global rate over the last 50 years. All climate models predict that the Arctic will be practically ice-free in summer at least once before 2050.

Prof Stephanie Henson, Principal Scientist in Marine Biogeochemistry at the National Oceanography Centre, said: “This report provides the scientific evidence of human-induced climate change, how it will impact all aspects of our oceans, atmosphere and land, and the implications for reaching the Paris Agreement target of limiting global warming to 1.5°C. I hope the report will spur further climate action commitments at an international level at the upcoming UN climate change conference in Glasgow.”

“I was privileged to be a lead author on the chapter dealing with the carbon cycle and climate feedbacks. This assessed the evidence of how human activities are altering the ways the oceans absorb and store CO2 from the atmosphere, particularly from a biological perspective.

“The evidence suggests that the biological carbon pump is an important component of the ocean carbon cycle, but there is really large uncertainty around how it will respond to ongoing climate change and how that will feed back to atmospheric CO2 levels. The observational and modelling work we’re doing at the NOC will hopefully start to fill some of these knowledge gaps over the coming years.”