How a tsunami wave works 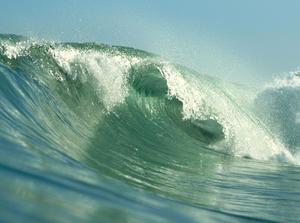 Tsunamis are long, powerful waves that are created by sub-sea earth movements – earthquakes, land and ice slips, meteor strikes. But not all Earth movements create these waves, many give little or no effect.

A tsunami occurs because the water mass of the ocean is displaced and, much like throwing a stone into a pond, waves are generated. The displacement in a tsunami creates a wave which is very long – up to 200 km (125 miles). These waves travel in a very predictable way that is determined by the water depth. Anyone with a calculator can predict its speed (square root of 9.81 times the water depth) so in the deep ocean at 5,000 m this is 221m per second, about 800 km an hour (500 mph) – the speed of a jumbo jet. In spite of this speed and power, out at sea the wave is usually less than one metre high. It would take about 15 minutes to pass a boat and would be barely noticeable.

As the wave hits the shoreline it rapidly slows to about 50 km an hour (30 mph) but the back of the wave is still travelling faster in deeper water and so is catching up with the front – a water traffic jam is taking place. The water has to go somewhere, so it goes up, building a wave of 10, 20, even 30 metres in height (some 30 to 100 feet). This wall of water finally arrives at the coast travelling at 30 to 50 km/hr (30 mph) causing massive destruction.

Why does the water level drop before the tsunami hits? Because it is like a tide, the tide goes out before it comes in. Traditionally we used to call these features ‘tide waves’ because they behave like a tide. The water particles haven’t travelled from the epicentre of the earthquake, they have oscillated back and forth and the tidal flow does just the same. As the tsunami approaches water is drawn back from the beach to effectively help feed the wave. In a tide the wave is so long that this happens slowly, over a few hours. In a short small ‘wind wave’ we see it happening every few seconds as we dodge waves on the beach. A tsunami is short enough to have a rapid effect, in minutes, but long enough to carry enormous energy. There is nothing physically unusual about tsunamis, they are normal waves, but their features are awesome.