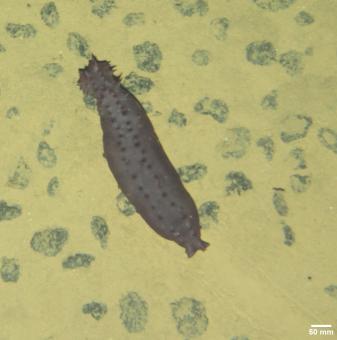 The study recently published in Progress in Oceanography, shows substantial differences in the number and types of deep-sea animals between the nodule field areas studied. Changes were observed across both local and regional scales.

The term abyssal plain refers to the parts of the open ocean seafloor that are deeper than 4000 metres. This type of environment is important, making up over half of the planet, but was long thought to be a uniform, flat expanse of cold mud with few inhabitants. More recently, it is becoming clear that abyssal plains harbour many different habitats and substantial biological variation.

At the Clarion Clipperton Zone the presence of hard rocky, potato-sized, nodules provides homes for a variety of animals that are not seen in the soft sediments. These environments are dominated by animals that attach themselves to the nodules, such as anemones, soft corals, or sponges. However, there is also a high diversity of larger and more mobile creatures, like sea cucumbers, brittle stars, or fish, despite their low numbers.

This research shows that variations in the seabed landscape, such as hills and valleys, but particularly variations in the abundance of nodules on the seabed have a strong influence on the structuring of abyssal communities, at local scales. In turn, the study also revealed unexpected shifts in the dominance of the most abundant groups of larger animals across the different areas studied, suggesting an overlooked ecological variability in the CCZ region.

The lead author of the study, Dr Erik Simon-Lledo, of the NOC in the UK, said “it was really surprising to see how species that were incredibly abundant in one area were almost absent from other sites, for no obvious reason”. Dr Simon-Lledo added “conservation management plans being developed for this region need to reflect the highly variable biological features we are finding across different mining-licensed areas if these are to effectively protect biodiversity within the CCZ basin”.

Dr Daniel Jones, a co-author of the study, also at the NOC, said “this study represents a great collaboration with scientists from the Kingdom of Tonga, Hawaii and Australia. Together, we used industry datasets to provide key insights into the abyssal environment that are already feeding directly into industry, government and international management of the deep Pacific”.

The abyssal seafloor of the Clarion Clipperton Zone has the largest known deposits of polymetallic nodules, rich in manganese, copper, nickel, and cobalt, amongst other critical metals targeted by the deep sea mining industry to support the growing demand for high-technology applications. The associated seabed communities typically have low numbers of animals but surprisingly high biodiversity. Therefore, substantial effort has been given in recent years to collect the information to develop effective conservation management for this region. However, and despite recent advances, the general environmental knowledge required to effectively protect these areas is limited, and studies like this one are in high demand.

The study is the result of a collaboration between the NOC, University of Hawaii, Ministry of Meteorology, Energy, Information, Disaster Management, Environment and Climate Change of the Kingdom of Tonga, and Nautilus Minerals funded within the Commonwealth Marine Economies Programme, which aims to enable safe and sustainable marine economies across Commonwealth Small Island Developing States.