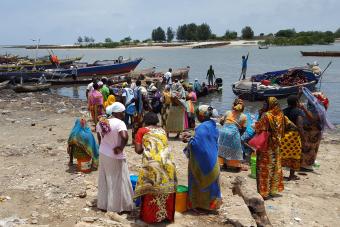 The usual methods of measuring dependence on fish as a food source at the national level appears to mask coastal community level dependence on fish, according to research by scientists at the National Oceanography Centre (NOC).

The real impact of changing ocean productivity on coastal communities could be overlooked when assessing levels of food security, with current proxies for food security often focusing on terrestrial agriculture and food sources.

Adapting traditional methods of measuring levels of food security revealed that the extreme level of dependence on fish for food security in coastal communities within Kenya and Madagascar is masked by the national level approach to assessing it.

From the national perspective it appears that Kenya and Madagascar have a secure supply of marine food, although they have a low national level dependence on fish for protein. However, by measuring marine food security in small-scale fisheries, this study has revealed that fishers are extremely dependent on fish for themselves and their dependents.

Within the proposed marine food security framework, the Comoros, Mauritius, Mozambique and Somalia appear to be the most vulnerable to accelerating impacts of climate change, human population, and fluctuation in total fish catch.

By adopting the approach to assessing marine food security outlined in this research paper, governments of countries within the Western Indian Ocean could gain a more accurate insight into the potential severity of the problem.

This research forms part of the Sustainable Oceans, Livelihoods and food Security Through Increased Capacity in Ecosystem (SOLSTICE) project, which aims to strengthen the ability of the nine Western Indian Ocean nations to address the challenges of sustainable management of marine resources.