The hidden role of krill in the carbon cycle 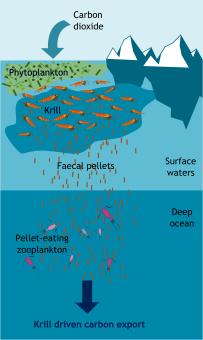 Large krill swarms in the Southern Ocean could help remove additional carbon from the atmosphere, in a way that is currently ‘hidden’ in global models. The new findings were recently published in Nature Communications by scientists from the NOC and the British Antarctic Survey (BAS).

Antarctic krill form some of the highest concentrations of animal biomass in the world’s oceans. They produce carbon-rich faecal pellets, which sink in the water column and can transfer carbon from the atmosphere to the deep ocean. This study provides the first estimate of how much carbon large swarms of Antarctic krill, living at the edge of the sea ice, can draw down and store through their faecal pellets. The efficiency of this process has an important influence on our global climate.

The patchy nature of krill swarms means that, at present, it is difficult to directly measure the contribution of krill to carbon storage. Global estimates based on these limited data are therefore likely to underestimate the contribution from the Southern Ocean.

To better constrain this Southern Ocean contribution, the research team estimated the krill density in the region using data from scientific net samples stored within the KRILLBASE scientific database. They combined this with estimates of krill faecal pellet production based on previous scientific research to gain an understanding of the potential ‘hidden’ carbon linked to Antarctic krill in the Southern Ocean.

Dr Anna Belcher, lead author and biogeochemist at BAS says: “Our study reveals that large krill swarms in the Southern Ocean could remove a significant amount of carbon from the atmosphere. This is exciting because it highlights, for the first time, how important Antarctic krill may be for carbon storage on a global scale.

Currently, this process is not well represented in many global climate models, so the next steps are to test how including krill affects our estimates of ocean carbon storage.”

Dr Stephanie Henson, one of the authors from the NOC says: “We know that without ocean biology pumping carbon into the ocean, atmospheric CO2 levels would be 50% higher than they are. This research adds an important element to understanding how ocean biology contributes to storing carbon in the deep ocean by revealing the significance of krill in the Southern Ocean.”