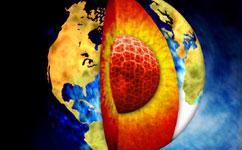 Plumes of hot rock from deep within the Earth are lacing rock beneath the Atlantic Ocean with gold, scientists have discovered.

The team, led by Alex Webber from the National Oceanography Centre, Southampton, looked at a region along the Mid-Atlantic Ridge, a volcanic spine running along the floor of the Atlantic where Europe and Africa slowly drift apart from the Americas.

The study looked at the sea floor surrounding Iceland, where a plume of hot rock from deep within the Earth rises to create a hot spot of volcanic activity.

Towards the centre of the plume, the team found up to ten times more gold than would otherwise be expected.

The Earth’s interior is structured with several distinct layers. The outer layer on which we live is known as the crust, a thin veneer around the bulk of the Earth a bit like the skin of an apple.

Such plumes exist beneath many sites around the world including Hawaii and East Africa. Scientists believe those sites might also be enriched with precious metals. Hot plumes originate from the edge of the core, our planet’s white-hot centre about 1800 miles deep. They travel through a thick layer of mostly solid rock lying between the core and the crust, known as the mantle. On arrival at the crust, they bring heat and volcanism.

The paper is published in Geology and was funded by a NERC PhD studentship.