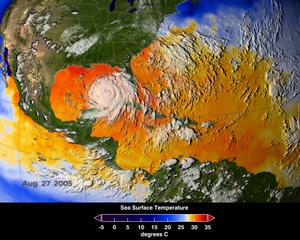 Extreme storm events of the magnitude of Hurricane Katrina will occur more frequently because of climate change, according to a new study involving the National Oceanography Centre in Liverpool.

The research, published in PNAS this week, concluded that the threat from hurricane-induced storm surges in the Atlantic will increase significantly as global temperatures rise.

Storm surges are localised increases in sea level, brought about by hurricanes, that can devastate coastal populations. During the 2005 Hurricane Katrina event, it was the storm surge that caused the widespread coastal flooding of New Orleans. There is therefore much interest in forecasting when and where these extreme changes in local sea level will occur.

The results of this study add evidence to the ongoing debate amongst scientists on whether hurricanes will become more frequent with global warming.

Dr Aslak Grinsted, lead author and researcher at the University of Copenhagen, explained “It is always difficult to say what caused individual extreme weather events. Our analysis indicates however that we have passed a global warming threshold where we are having twice as frequent Katrina magnitude surges.”

Co-author Dr Svetlana Jevrejeva of the National Oceanography Centre in Liverpool explained why their approach was novel. “Previous studies have used climate models to forecast future hurricane frequency, but these findings have been controversial and there is much disagreement among scientists regarding the relationship between hurricanes and temperature. In our study we used sea level data measured by various tide gauges throughout the 20th century to see how extreme sea level during hurricanes has changed with temperature.” 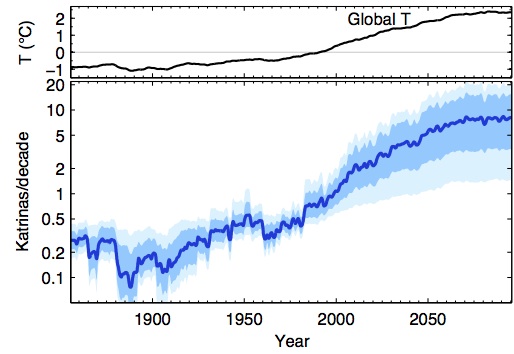 The researchers then combined these historic data with projections of climate change, to predict how many Katrina-like storm surges would occur in the future: “The results show that the extreme sea levels observed during Hurricane Katrina will become ten times more likely if average global temperatures increase by two degrees Celsius,” said Dr Jevrejeva.