Global sea-level rise has been accelerating since 1960 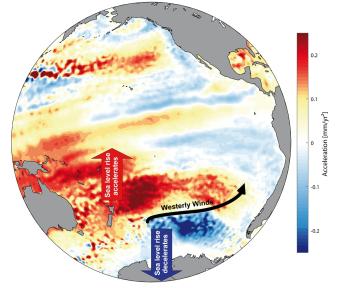 The recent acceleration in global sea-level actually started in the 1960s, around three decades earlier than previously thought. This is according to new research published in the journal Nature Climate Change and involving National Oceanography Centre (NOC) scientists.

Led by the University of Siegen in Germany, this study is the first to put a starting date on the acceleration and identify its main driving factors.

Satellite measurements show the rate of global sea-level rise has been accelerating since at least the beginning of the satellite record, in 1992. The acceleration is largely due to increased melting from the Greenland and Antarctic ice sheets.

However, until now it was unclear when the acceleration started and whether other factors were involved. This was primarily due to the difficulty of inferring global sea level from a sparse tide gauge record that was the only source of sea-level information prior to 1992.

An international team of scientists addressed the limitations posed by the sparseness of the tide gauge record by using a novel approach, which combines the merits of the tide gauge and satellite datasets to estimate global mean sea level since 1900 with unprecedented accuracy.

Global sea-level rise is the direct result of an increase in the global ocean volume, primarily due to land-ice melting and the thermal expansion induced by ocean heat uptake.

NOC scientist Dr Francisco Mir Calafat, who is an author on this paper, said “While the acceleration over the altimetry era has been largely attributed to ice melting, we have found that much of the acceleration prior to that period was due to an intensification and equatorward shift of Southern Hemispheric westerly winds. This led to changes in the circulation of the Southern Ocean, with a consequent increase in ocean heat uptake.

This finding is significant because it highlights the importance of thermal expansion as a contributor to the sea-level acceleration, as well as providing corroborating evidence for the pattern of acceleration simulated by climate models in the Southern Ocean”.

This is the first estimate of global mean sea-level acceleration that incorporates short term-variations in sea level, as well as long-term trends.

Dr Francisco Mir Calafat continued, “Combining these two aspects in the model widens its usefulness for the marine science community. So scientists could use it to better understand short term changes to sea-level, such as that from El Nino, as well as the wider trend of global sea level rise.”

This forms part of the NOC’s on-going research into sea-level rise, that revealed last year that rising sea levels could cost £11 trillion worldwide annually by 2100, if the target of holding increasing global temperatures within 2ºC of pre-industrial levels is missed.