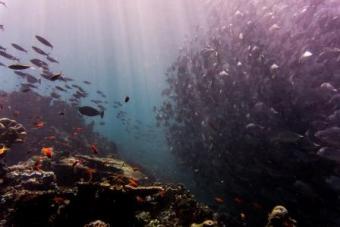 How global climate change will alter the ocean and ecosystems at the heart of global food security over the 21st century has been highlighted by a trio of ground-breaking research papers.

The studies, published in the leading journals Nature Communications, Science and Global Change Biology, were co-authored by scientists at the National Oceanography Centre (NOC). The Science paper highlights the profound challenges that face species and ecosystems, and demonstrates that the resulting “species on the move” will impact the human systems that depend on them – including economic development, livelihoods, food security and culture. Changes have already been observed from the tropics to the poles, and these are expected to continue and, potentially, become more severe. NOC scientist and co-author, Dr Ekaterina Popova, commented that “this review draws particular attention to the relatively limited understanding of these issues, as well as the significant governance challenges they present.”

The authors of the Science paper conclude that ongoing climatic change is causing the largest global redistribution of species since the last glacial maximum. A second study, published today by NOC scientists as a part of a special issue of Global Change Biology, investigates whether marine ecosystems will be altered as much by changing ocean currents, as they will be by ocean acidification, warming or de-oxygenation.

Ocean currents shape the structure of marine ecosystems by creating the flow pathways by which marine species disperse their larvae. Currents may assist – or can prevent – these larvae from reaching marine environments in which they can survive and thrive. Strong changes in the intensity and position of ocean currents have already been observed, and the consequences of such changes for ecosystems are beginning to emerge. To investigate this, NOC scientists in collaboration with scientists from Australia and USA, studied climatically-induced changes in ocean circulation on a global scale, and in a way that predicts the future of species living in the shelf seas.

By adding virtual particles to a global simulation of ocean currents over the 21st century, the team calculated how the dispersion of marine organisms may change under extreme climate change for the entire global coastline. They found that existing circulation patterns vary in whether they assist – or hinder – marine species in pole-ward dispersal towards cooler waters that counters the general warming of climate change. They were able to identify areas of the global ocean where changes in dispersal pathways will be most pronounced across the 21st century.

Dr Ekaterina Popova commented, “What really surprised us is the strength and ubiquitous nature of the circulation changes predicted by our models. In view of these findings, as well as the growing body of observational evidence, we may need to rethink what we consider to be the key climatic stressors of marine ecosystems and add changing ocean circulation to the list”.

A third paper in Nature Communications, led by scientists at the NOC, showed that within the next fifteen years over half of the ocean could be experiencing a combination of stressors, such as acidification, de-oxygenation and/or warming, if emissions continue at ‘business-as-usual’ levels. However, the study also showed that if climate change mitigation measures, such as those outlined in the IPCC report, are implemented, it will slow down the development of multiple stressors by 20 years.

Lead author, Dr Stephanie Henson, from the NOC, said “Understanding how the marine ecosystem might respond to these rapid changes in the ocean environment is the next big question in oceanography. This forms part of the NOC’s on-going research into the future of the ocean.”

Taken together, these studies serve to underscore the link between climatic and ecosystem change. Long-established ecosystems will be stretched as their component species are subjected to differing degrees of stress, and ocean circulation acts to either contribute to or ameliorate this stress by providing a means for species to be dispersed to more favourable conditions.

The model analyses performed for the research in Science and Global Change Biology was funded by the UK Natural Environmental Research Council’s (NERC) National Capability and Strategic Research Impact programmes. As was the research in Nature Communications.