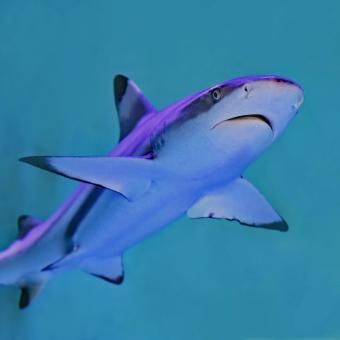 The global effort to overturn recent declines in the world’s shark population could be helped by new insights into their feeding habits. Ocean modelling by scientists at the National Oceanography Centre (NOC) is enabling this new research, led by the University of Southampton and published in Nature Ecology & Evolution.

Dr Andrew Yool from the NOC, who formed part of the team who worked on this project, said: “When plankton grow, they leave an isotopic signal in the material composing their bodies, and through predation this signal ultimately appears in animals further up the food chain – such as the sharks of this study.”

Using output from simulations of the leading global ocean circulation model called NEMO-MEDUSA, the isotopic composition of this organic matter in the ocean was mapped out. The scientists were then able to reconstruct the spatial patterns of feeding in sharks from across the world.

The NEMO ocean model is supported by UK National Capability funding from the Natural Environment Research Council (NERC). Dr Yool added: “Although NEMO-MEDUSA has been developed to study problems like climate change and ocean acidification, its use in this research illustrates its wider value.”

Dr Christopher Bird led this research during his PhD at Southampton, which used chemical markers in the form of carbon isotopes found in sharks to investigate where in the world they have been feeding – an unresolved question for many shark species. Knowing which parts of the global ocean are important shark feeding areas may help to design more effective conservation measures to protect declining shark populations.

All life depends on carbon at the bottom of the food chain. Carbon comes in three forms or isotopes, and the proportions of two of the most common isotopes vary across the world’s ocean. In the study, 73 scientists from 21 countries compared the carbon isotopes from more than 5000 sharks from 114 species across the globe with those from phytoplankton at the bottom of the food web.

“You’ve heard of ‘you are what you eat’ - well this is more ‘you are where you ate’”, Dr Bird continued. “We were able to show that sharks living close to land and those that live in the open ocean have very different ways of feeding.

Our results show that sharks living near to the coast feed locally across a range of different food webs –this is like people living in a city with access to lots of different restaurants in the neighbourhood and no need to travel far to find the food they want. On the other hand, oceanic sharks that are found throughout the world’s oceans, appear to get most of their food from specific areas of cooler water in the northern and southern hemispheres.”

Senior author Dr Clive Trueman, Associate Professor in Marine Ecology also from the University of Southampton, added: “The results have important implications for conservation. Globally, sharks are not doing well. Many shark populations have declined in the last few decades. Sharks urgently need our help, but to help them we also need to understand them. Our study has helped by identifying important shark feeding grounds. New technologies like satellite and isotope tracking are giving us the information we need to turn the tide on these beautiful and fascinating animals.”