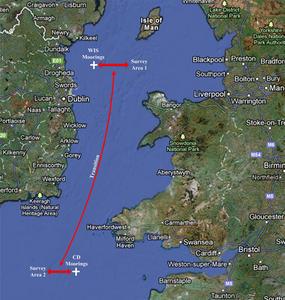 An NOC underwater glider has completed a 58-day mission in the Irish Sea zigzagging a total of 1685 miles – while avoiding hazards such as fishing vessels and shipping lanes.

The mission has provided over 10,000 profiles of the water column from the near surface to 100metres deep. Gliders are propelled forwards as they dive and climb through the water travelling around a mile an hour. Every three hours measurements were transmitted by satellite to the NOC throughout the deployment when the glider surfaced.

Dr Matthew Palmer and Chris Balfour who are based at NOC’s Liverpool site programmed the Slocum electric glider to move in a zig-zag pattern to gather data from the Western Irish Sea, along the St George’s Channel and the Celtic Deep off the south Wales coast. It was fitted with a generous complement of oceanographic and biogeochemical sensors as part of the UK-IMON (the UK Integrated Marine Observing Network) initiative.

Matthew Palmer said “The glider provided us with repeat, high resolution transects in areas where the ocean structure is changing rapidly due to spring heating. This changing structure triggers the spring bloom of phytoplankton that accounts for much of the biological growth in shelf seas. While we have a good understanding of the broad-scale development of stratification we still have a poor understanding of the small-scale physical processes that trigger the transition to stratification and the biological consequences.”

A particular goal of this project was to exploit new sensing technology to enhance routine measurements that are made in coastal waters. The long duration glider survey acted as an excellent example of the use of new sensing technology operated by NOC. Complementary fluorescence and oxygen measurements provide a better understanding of the phytoplankton dynamics in this rapidly changing environment. The glider has returned a wealth of scientific information that would be difficult and costly to accomplish by other means. The work was funded by Cefas as part of the UK-IMON initiative.

Next month, the National Oceanography Centre will be hosting a workshop on new monitoring technologies focusing on prioritising future investment. The workshop is organised by IMarEST and UK-IMON and will be held on Tuesday 10 to Thursday 12 September 2013 at the NOC, Southampton. www.imarest.org/OurEvents/EventListings/UK-IMONNewMonitoringTechnologies/10-12September2013.aspx.