The geological record of ocean acidification 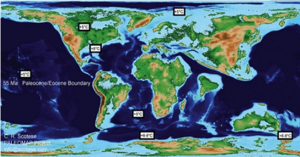 The burning of fossil fuels is releasing vast quantities of extra carbon dioxide (CO2) to the Earth’s atmosphere. While a proportion of this stays in the atmosphere, raising atmospheric CO2 levels, around half is removed over time, either to become sequestered in trees and plants or to become absorbed in the ocean.

When it dissolves in the ocean, CO2 changes the chemistry of the water, making it more acidic. As a result the oceans are around 30% more acidic today than they were before the industrial revolution – a process known as ocean acidification. In this weeks issue of Science, a paper by a team of scientists from various research institutions worldwide, including Dr Samantha Gibbs and Dr Gavin Foster from OES, puts this unprecedented change in its geological context.

The geological record contains evidence for a variety of long-term global environmental perturbations along with their associated biotic responses, including several well studied natural ocean acidification events. By studying such events in the past we may be able to see how the Earth System has reacted to ocean acidification before and so how it may respond in years to come. In this new study, the result of a workshop led by Columbia University’s Lamont-Doherty Earth Observatory and the University of Bristol, the most commonly cited examples of the last 300 million years are critically examined, including the asteroid impact that made the dinosaurs go extinct and the Permian mass-extinction which wiped out around 95% of all life on Earth. Then, these events were ranked according to their similarity with the modern situation, in terms of the magnitude and rate of carbon emissions.

Dr Samantha Gibbs, an expert on microscopic plankton fossils, says “all these events provide valuable insights but the massive global warming event 56 million years ago known as the Palaeocene-Eocene thermal maximum clearly stands out. Although not even this event is large enough to parallel the unprecedented CO2 rise that is currently underway”. Dr Gavin Foster added “However, by studying it, and similar events in some detail, we may still be able to learn something very useful about what levels and rates of acidification have proven particularly dangerous to the Earth System in past”.

Dr Gibbs and Dr Foster are funded by NERC and the Royal Society and, as part of a number of UK-wide research initiatives (www.oceanacidification.org.uk and www.descentintotheicehouse.org.uk), reconstruct the environment of the past and examine the biotic response to wide range of natural climate change events.