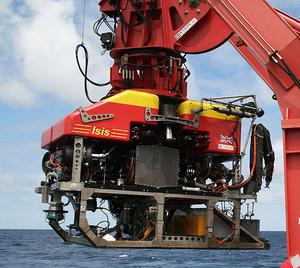 A decision that ensures the future provision of remotely operated vehicle (ROV) capability for the UK marine science community has been taken by the National Oceanography Centre (NOC), working with its partners.

This ends a period of uncertainty following a shipboard incident in late January that resulted in severe damage to the Isis ROV.

Since it was commissioned in 2006, Isis, which can operate to a depth 6,500 metres has firmly established its reputation as a versatile platform for deep sea exploration. The range of cameras, tools and manipulators that Isis can carry enables her to undertake many diverse missions, while the NOC ROV team has gained a reputation for long and challenging dives which is the envy of many other operators. Since commissioning, Isis has achieved nearly 3,700 hours of dive time during 347 days of research cruises, which have ranged from the Eastern Pacific to the Antarctic Peninsula.

A basic repair of Isis that will restore the majority of these systems and instruments that were in place prior to the incident has been given the go-ahead following an exhaustive options appraisal in April. Work to identify all the funding needed is still ongoing, but it is anticipated that Isis will be trialled and available for scientific research next year.

In parallel, NOC has been working with German colleagues at IFM-GEOMAR to provide a substitute ROV capability, Kiel6000, for a cruise later this year. In preparation, members of NOC’s Sea Systems ROV team are this month assisting with the mobilisation of Kiel6000 on the RV Polarstern, and will then join a research cruise to the Arctic in July to August to receive training on the Kiel6000 systems. Meanwhile, a number of modifications to support Kiel6000 operations will be carried out to the RRS James Cook during her refit in June and July.

The strength of the growing links between NERC and IFM-GEOMAR has been underlined by exploratory talks to forge a longer term, strategic relationship for the development and operation of ROVs and other underwater vehicles. Both parties are extremely enthusiastic about the potential for this collaboration, which would enable scientists from both countries’ research communities to access a developing pool of ROVs and other state-of-the-art facilities. This collaboration is a natural extension of the strong record of ship bartering activities between NERC and the German Federal Ministry of Education and Research (BMBF) through the Ocean Facilities Exchange Group (OFEG).