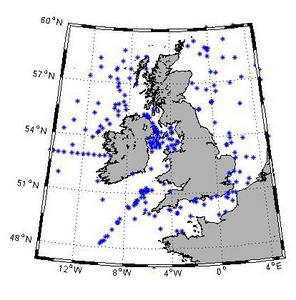 Thousands of sea water samples are being collected by research vessels around the British Isles as part of an 18 month study of how much carbon dioxide is taken up (and released) in UK waters.

Coordinated by the National Oceanography Centre (NOC), the University of Liverpool and Plymouth Marine Laboratory, the shelf-wide sampling project is part of the larger Shelf Sea Biogeochemistry programme, jointly funded by the Natural Environment Research Council (NERC) and the Department for Environment, Food and Rural Affairs (Defra). The sampling covers an area from Rockall to beyond the Scilly Isles and most of the North Sea and is unique in its scale and seasonal coverage.

This project involves ships from four organisations: Centre for Environment, Fisheries and Aquaculture Science (CEFAS) Marine Scotland, the Agri-Food and Biosciences Institute (AFBI) and the Marine Institute in Ireland.

Since April, staff onboard the vessels have been collecting samples of the seawater at noon every day in special glass tubes, then syringe filtering and freezing them. Additional data are also being collected by Ferryboxes – specialist equipment that analyses water samples – on ferries from Germany, Spain and Norway into UK waters.

Over the past few months, crates of frozen samples have been arriving at NOC in Southampton and Liverpool, the University of Liverpool and Plymouth Marine Laboratory, where scientists have begun analysing the samples. They are looking at the carbon and nutrient levels in the water and monitoring how much carbon is being taken up by the ocean during different seasons of the year. The findings will contribute to monthly data maps of the ocean’s carbon content and feed into wider studies about its impact on climate throughout the year.

Sue Hartman from NOC who is coordinating the shelf sampling, said: “We have made a fantastic start to the sampling project – we’re now more than six months in and we’ve already collected over two thousand seawater samples. The success of this project is entirely dependent on the dedication and co-operation of the staff from our partner organisations and we’d like to thank them for their ongoing input. The samples we’ve already received form an invaluable part of our research.”

Shelf seas can be up to 200 metres deep. Around the British Isles they include the North Sea, English Channel, Celtic Sea, Irish Sea and seas around Scotland. They play an important role in the ecosystem services provided by the ocean as a whole, in particular in removing carbon dioxide from the atmosphere and storing some of it in seafloor sediments and carrying it to deeper waters.

The shelf-wide sampling is part of a Shelf Sea Biogeochemistry project called CaNDyFloSS: Carbon and Nutrient Dynamics and Fluxes over Shelf Systems, which will provide new, improved estimates of the role of shelf seas in the global nutrient and carbon cycles.