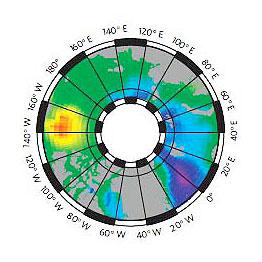 These results are fascinating because they offer a glimpse of the future...

A bulge of freshwater has been building up in the Arctic Ocean.

Scientists at the National Oceanography Centre have been working with the Centre for Polar Observation and Modelling at University College London to study the freshwater, which has been building up in the Beaufort Sea, a part of the western Arctic Ocean.

The freshwater mainly comes from Siberian rivers, which empty into the Arctic basin. The strengthening of the wind circulation causes the gyre to spin up (ie accelerate), forcing more water into the centre of the gyre, by Ekman pumping. The circulation speed of the gyre nearly trebled as a consequence, increasing from 1.9 cm/s at the start of the record to 5.5 cm/s in 2010.

A change in the winds, either a reversal or possibly just a weakening, could reverse the action, causing freshwater to spin outwards, releasing it to the rest of the Arctic Ocean and beyond, with potential consequences for dense-water formation in the northern North Atlantic.

Co-author Sheldon Bacon, says “These results are fascinating because they offer a glimpse of the future. Climate models predict that the Arctic Ocean will become ice-free in summer in 30-40 years’ time, so the surface of the Arctic Ocean will be directly exposed to wind forcing, without the blocking influence of sea ice. We’re seeing a foretaste of what might then happen to the ocean: it will become much more dynamic, and it is hard to guess what might then happen.”

Fifteen years of sea surface height data (1995 to 2010) from the radar altimeters aboard the European Space Agency’s satellites ERS-2 and Envisat were analysed. The results show that the freshwater content of the Beaufort Sea has increased by around 8,000 cubic kilometres between the mid-1990s and 2010, with the increase starting around 2002–3. Over this period, sea level in the centre of the bulge has risen by a total of 15 cm, at a rate of 2 cm per year.

Writing in Nature Geoscience, researchers say that this dome of water has been produced by anti-cyclonic (clockwise, in the northern hemisphere) winds which generate a circulation feature in the ocean called the Beaufort Gyre.