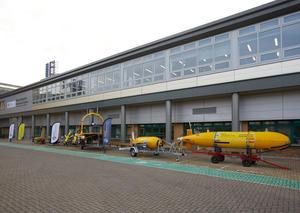 The first opportunity for the public to view a live demonstration of world-leading technology that enables a fleet of robotic-subs to work together to measure the ocean’s properties, will take place at the National Oceanography Centre (NOC) this Wednesday.

This public demonstration will test software build by SeeByte that acts like a ‘central brain’, making decisions about where robot-subs should go based on the changing environment around them, which is measured using in-built sensors. The software will be tested against a computer simulated environment, including virtual tidal mixing fronts in the ocean and virtual robot-subs to explore them.

Tidal mixing fronts are the areas of the ocean where two tides meet, and are of scientific interest because they provide ideal conditions for abundant plankton growth, which in turn can attract large numbers of fish, seabirds, dolphins and basking sharks.

The ability to work together and adapt to the environment will enable robot-subs to focus their time on measuring what is relevant, rather than simply performing a static search over large areas, therefore making the operation more time efficient. For example, when one observes evidence of a tidal mixing front it can focus time on that area and ask the other robot-subs to do the same.

This new software, built as part of SeeByte’s Neptune suite for robot-subs, was developed during a two-phase competition managed by the NOC as part of a Small Business Research Initiative. The trial will be conducted by SeeByte with support from the NOC within the Marine Robotics Innovation Centre, where SeeByte has office space.

The NOC is facilitating this project by providing real world scientific ‘problems’ to test the software against. Additionally, the NOC is providing world-leading marine robotics testing facilities in the Marine Robotics Innovation Centre.

Dr Jonathan Evans, Engineering Manager at SeeByte, commented “Working on this project has allowed us to bring never-seen before capabilities to oceanography and marine scientific research. NOC have provided us with support throughout the project, as well as access to leading facilities and expertise. We hope that having a presence in the Marine Robotics Innovation Centre will give SeeByte the best opportunities to continue working closely with NOC and the rest of oceanographic community”.

Called the Autonomous Adaptive Ocean Sampling Network (AAOSN), this two-phase competition was launched last September. The launch was made by the Natural Environment Research Council (NERC) in partnership with the Defence Science and Technology Laboratory (DSTL) and Innovate UK, with £1.5 million being made available for the project. Phase one saw nine consortia submit feasibility studies, five of which were funded. After a review of the outcomes of the phase one studies, two consortia were invited to apply for phase two for the development of prototypes, which would be capable of undertaking demonstration missions at sea.

This public demonstration within the Marine Robotics Innovation Centre comes ahead of the NOC’s public open day which will be held on 21 May 2016.