A final farewell to Discovery 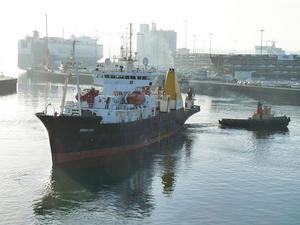 Friday 21 December saw the final departure of a ship that has served UK marine science for the past 50 years.

Crew members and scientists who have worked aboard the ship gathered at Empress Dock, home of the National Oceanography Centre in Southampton, to wave her off on her final voyage to Chatham, where she will berth before going on to Ghent in Belgium where she will be broken up and recycled.

The Royal Research Ships Discovery and James Cook are provided to the UK marine science community by the National Oceanography Centre on behalf of the Natural Environment Research Council.

Work carried out aboard Discovery during her 382 missions has included surveying the ocean floor, measuring ocean currents, monitoring climate change, and discovering new species around the globe. Her final research cruise investigated changes to Atlantic Ocean currents, collecting data from an array of moorings between the Canaries and the Bahamas. DiscoveryCaptain Peter Sarjeant recently attended the Met Office to receive an award recognising the ship as the longest serving observing vessel to have provided data to their programme.

In addition to increasing a body of scientific knowledge, the ship has also grown – by 10 metres. During a refit in 1990-1992 the hull’s middle section was extended, increasing her length to 90.2 metres.

Earlier this year researchers, officers and crew associated with Discovery met to celebrate the scientific and technological achievements made over the years. The blog site http://memoriesofdiscovery.blogspot.co.uk has contributions from scientists, officers and crew recalling their first expedition and life on board this venerable vessel.