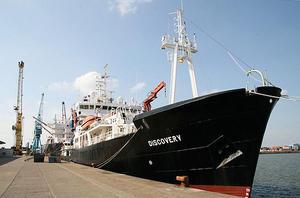 The 50th anniversary of the launch of the Royal Research Ship Discovery will be marked on 2 July 2012. This will be her last year of service, a half-century of science that has included surveying the ocean floor, measuring ocean currents, monitoring climate change, and discovering new species around the globe.

When RRS Discovery was launched in 1962 there was no satellite navigation (this didn’t begin until 1969); Harold MacMillan was Prime Minister; there was no GPS (this was fitted in 1986); and John F Kennedy was President.

But it is the people who worked on board Discovery who pushed the boundaries of ocean knowledge and it is these people who are meeting on the 2 July to recall their time at sea. Researchers, officers and crew associated with her over the years will meet at the National Oceanography Centre in Southampton to celebrate the scientific and technological achievements made aboard Discovery. There will be a guided tour of the vessel; talks highlighting the scientific and marine experiences and legacy; and an exhibition of photographs and memorabilia, including a preview of the new Discovery.

During the celebrations the ship is mobilising for her next expedition. Discovery will set out for the deep ocean southwest of Lands End to photograph and map the seafloor with the robot submarine Autosub. Using this latest technology, Discovery will enable researchers to prepare the ocean version of a Google street map of the habitat and residents of the Porcupine Abyssal Plain, two and a half miles (4000 metres) deep.

In addition to increasing a body of scientific knowledge, the ship has also grown – by 10 metres. During a refit in the 1980s the hull’s middle section was extended, increasing her length to 90.2 metres.

Owned by the Natural Environment Research Centre and operated by the National Oceanography Centre, Discovery will be withdrawn from use at the end of the year. The building of a replacement vessel is already under way.

Please note, this event is not open to the general public. Veterans of RRS Discovery’s early cruises will be among the guests.