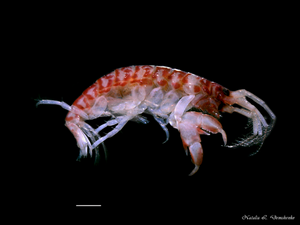 Thirty amphipod experts have been lined up to improve and update the information held in the World Amphipoda database. The aim is to equip the myriad of end-users with the tools and information to identify and differentiate between amphipod species.

The Amphipoda is a group of small shrimp-like animals that are related to a diverse range of crustaceans, including crabs, lobsters and shrimp. There are presently nearly 10,000 species described as amphipods, and this number rises year on year.

Dr Tammy Horton, taxonomist at the National Oceanography Centre, will be instrumental in bringing the database up-to-date. “As taxonomists, our science focuses on describing animals so that we can tell one apart from another,” she says. “When you describe a new species, you also write a key so that other people can identify their own specimens. By developing a database of this information, you can make those resources available to people who aren’t experts, so that everyone can do it.

“But how good the database is depends on how much effort taxonomists can put into it.”

The database has been running for several years, but has not been updated since 2010. Therefore Dr Horton enlisted 30 amphipod taxonomists, who will donate their time to work on their specialist area of the database.

“With nearly 10,000 species to look after, we needed to get more experts involved. Each entry requires a lot of information – the correct name, old names, the original description, literature references, plus facts about the species’ habitat, distribution and so on.

“And every time someone describes a new species of amphipod, it needs to be added, so the database is continually improved and updated.”

Information from the World Amphipoda Database is fed into the World Register of Marine Species (WoRMS), which, as the most comprehensive primary source of quality-assured information on marine species, is the international standard in its field. Beneficiaries of the information – which is often accessed through other databases that are fed by WoRMS – include scientists, consultants, conservationists, journalists, the general public, and many others.

The coordination of this project is funded jointly by INDEEP (International network for scientific investigation of deep-sea ecosystems) and BP, both of which are committed to enhancing access to taxonomy. This is the second launch within a year for an INDEEP-funded project – in March the World Register for Deep Sea Species (WoRDSS) was launched, as well as the associated deep-sea species identification app. Both the database and the app will contain information on deep-sea crustaceans from the World Amphipoda Database.