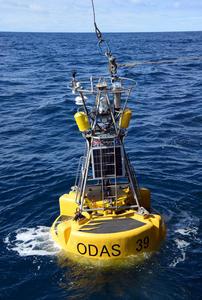 European scientists are joining forces to better understand oceanic change, by coordinating ocean data acquisition, analysis and response on scales ranging from the provincial to the global.

Marking a major milestone, the first Assembly of Members meeting of the European Multidisciplinary Seafloor and water-column Observatory (EMSO) will be held September 28-29th in Rome, Italy.

Dr Henry Ruhl of the National Oceanography Centre (NOC), who form part of EMSO, said “Society has an increasing need for improving the availability of high quality data to understanding climate change and geo-hazards. For example the oceans store large quantities of heat and carbon dioxide, an important greenhouse gas.”

EMSO is a distributed research infrastructure, composed of fixed-point open ocean observatory nodes, whose aim is to provide coherent long-term data sets for research and monitoring. This will not only bring together countries and disciplines, but also allow the pooling of resources and coordination to assemble harmonised data into a comprehensive a regional ocean picture. This data will be made openly available to researchers and stakeholders worldwide.

The key contribution of the United Kingdom to the EMSO effort is data from the Porcupine Abyssal Plain sustained ocean observatory, coordinated by the NOC. This site is located about 300 km west of Lands End and has been the location of research on the role of biology in controlling the transfer of carbon from the atmosphere to the deep sea for two decades. Its location and long-term records make it a key asset for understanding change in the ocean.

EMSO is now beginning a new level of organisation as a European Research Infrastructure Consortium (ERIC), a form of governance structure for such activities that allows for longer term strategic management of large scale efforts. The EMSO founding members, and therefore its Assembly of Members, include Italy, France, Greece, Ireland, Portugal, Romania, Spain and United Kingdom, and its coordination office is hosted in Rome.

“It’s a well-accepted concept to have stations for observing weather and seismic activity on land, but our planet is mostly ocean. However, efforts to do this kind of work offshore have really matured over the last decade.” Says Professor Paolo Favali of the Istituto Nazionale di Geofisica e Vulcanologia in Rome.

EMSO observation data is collected from the ocean’s surface, through the water column to sub-seafloor across geo-hazard, physical, biogeochemical and ecological themes, with various local emphases. EMSO planning spans from polar to sub-tropical climatic zones and from the Atlantic to the Mediterranean sea of Marmara and the Black Sea. This offers a broad spectrum of study areas across diverse environments. Critically, the systems can send data to land through seafloor telecommunication cables or satellite connections from surface buoys. Test sites are also fundamental facilities for devices being incorporated into EMSO nodes.

With observatory initiatives from Canada, USA, Japan, China, Taiwan and Australia, EMSO rides a global wave of understanding that ocean processes drive our planet. EMSO also represents a fundamental contribution to the long-term vision of the Global Ocean Observing System (GOOS) eg, through the Oceansites component of GOOS. It will contribute direct oceanic observations for the EU Global Monitoring for Environment and Security Initiative, COPERNICUS, and is aligned with the challenges and key priorities of the EU Marine Strategy Framework Directive (MSFD). The data collected by EMSO will also support policy and legislation of organisations such as the Intergovernmental Panel on Climate Change (IPCC), the United Nations Environment Programme (UNEP) and the Group on Earth Observation (GEO), just to mention a few. Importantly, EMSO also joins with other ERIC efforts such as the Integrated Carbon Observing System (ICOS).