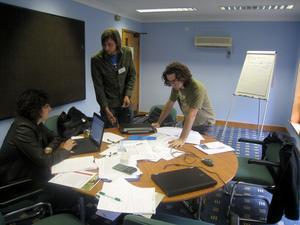 The mentoring we received from successful entrepreneurs was fantastic.

A team of students representing the University of Southampton has won the Southern regional heat of a national enterprise competition.

Southampton postgraduates Mahadji Bahi, David Owsianka and Victoire Rerolle, along with visiting student Alex Beaton of the University of Bristol will get the chance to show off their skills at the national final in London on Monday 13 December. All are currently working in the Centre for Marine Microsystems, based at the National Oceanography Centre, Southampton.

The students were competing in Environment YES (Young Entrepreneur Scheme) against teams from around the Southern UK. The competition was set up by the Natural Environment Research Council (NERC) to raise awareness of commercialisation and enterprise within environmental research, and is run over a period of three days.

During this time, participants attend lectures and presentations from leading figures in industry on all aspects of technology transfer. Following two days of intense training and preparation, the 4–5 person teams present a business plan to a panel of judges drawn from industry and from within NERC who play the role of investors. Although the businesses are imaginary they are based on feasible scientific ideas, and teams are challenged on whether theirs has the potential to make money.

Team member Alex Beaton, said “Although I knew about research spin-off companies, the workshop really made me aware of the key things that a business needs to succeed. I had not considered this as a career path before.”

Victoire Rerolle agreed, adding “The workshop covered things that you just don’t think about during your normal working day. The mentoring we received from successful entrepreneurs was fantastic.”

In preparation for the workshop, the team received assistance from their colleagues, and from R&IS (Research and Innovation Services), the technology transfer arm of the University of Southampton. Karl Simpson, head of the faculty team for Medicine, Health and Life Sciences at R&IS reviewed the groups ideas, and was on hand to offer help and advice.

Environment YES was run for the first time in 2007, based on the established Biotechnology YES scheme aimed at bioscience postgraduates and postdoctoral researchers. This year saw record numbers of teams participating in both schemes with over 500 individuals taking part. Judges for this year’s competition commented on the high standard of business plans put forward, some of which were of a quality normally expected of students studying full time business degrees.

Commenting on the heavy workload placed on competitors, Mahadji Bahi said “Having to deliver a business plan in such a short space of time, the pressure was definitely on. I think we were all surprised by what we achieved.”

The team worked long into the night to complete the task. “We didn’t get much sleep the night before the presentation, but it was well worth it – I got a real buzz from having to think on my feet to answer the judges’ questions. I would recommend the scheme to any early career environmental scientists,” said David Owsianka.