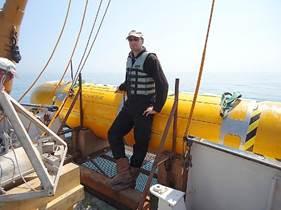 The 2013 RGS-IBG/NOC lecture will be given by Dr Russell Wynn, Head of Marine Geoscience at the National Oceanography Centre.

Dr Russell Wynn will cover aspects of marine mapping from the deep sea to shallow water, and include geohazards and emerging technologies. The talk will also consider the impact of such mapping on seabirds and cetaceans.

Marine mapping is a highly topical subject given the urgent need for a scientifically accurate base on which to carry out planning such as the proposed network of marine conservation zones around the UK, and the development of such offshore renewables as wind farms.

Russell is extremely well qualified to cover this subject having been appointed recently the inaugural Chief Scientist of the Marine Autonomous and Robotics Systems (MARS) Group. This will be helping to develop the UK marine science community’s capability in marine autonomous systems as part of the Science Minister’s recently announced initiative on “Eight Great Technologies”.

Tickets: This lecture is free and open to all, so please just turn up on the evening (seats on a first-come, first-served basis).