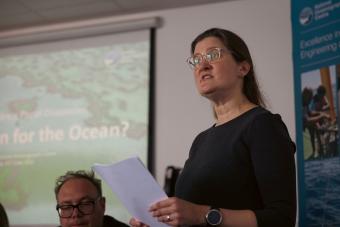 The discussion reflected on what kinds of global governance instruments are required for the world to meet UN Sustainable Development Goal 14: Ocean and Life Below Water, and the challenges posed by the UN Decade of Ocean Science in light of existing and emerging international norms, laws and institutions.

Global Constitutionalism, an interdisciplinary peer-reviewed journal dedicated to global and transnational aspects of human rights, democracy and the rule of law will publish thought pieces from the panelists in a future edition.

A Constitution for the Ocean?

Entitled “A Constitution for the Ocean?” the interdisciplinary panel of speakers included Professor Chris Armstrong from the University of Southampton, Professor Steve Fletcher from the University of Portsmouth, Dr Katherine Hill from the G7 Future of the Seas and Oceans Coordination Centre and Dr Emma McKinley from Cardiff University. Associate Professor Laurie Wright from Solent University chaired the discussion, and Associate Professor Jonathan Havercroft, editor of Global Constitutionalism who delivered closing remarks connecting ocean governance to constitutional theory and political science.

Panelists were joined by a room full of audience members, including individuals from environmental charities, industry and local universities. A number of NOC scientists and postgraduate students from the University of Southampton’s School of Ocean and Earth Science were also in attendance.

Alice Kloker, NOC’s Stakeholder Engagement Manager, introduced the event with reference to NOC’s recent contribution to the House of Lords International Relations and Defence Committee inquiry entitled “UNCLOS: fit for purpose in the 21st Century?” in which it called upon the UK to continue to be seen as a global leader in protecting and preserving the marine environment through such measures as articulating how UNCLOS helps deliver the 2030 Agenda for Sustainable Development, continued participation at UN fora and greater engagement with UK Overseas Territories.

Panelists engaged with audience members around a number of topics including the importance of funding interdisciplinary research that recognises the time required to build productive relationships across the natural and social sciences as well as the critical role community and industry stakeholders play around issues of ocean governance.

The discussion also touched upon the need to connect ocean governance discussions to environmental policy on land, given that around 80% of pollution to the marine environment comes from the land. The land-sea connection was identified as a gap in current ocean governance framework, although both audience members and panelists commented about the potential of transformative blue governance to generate positive impacts across all 17 Sustainable Development Goals, and not just SDG 14: Life Below Water.

Another theme of discussion was the difficulty of effective enforcement mechanisms when it comes to international law, with state sovereignty used as an argument against global governance of the ocean and its resources. With regards to tackling global ocean problems such as plastic pollution and climate impacts, Professor Fletcher articulated the tension between the need for global-scale strategic action and the fact that policy implementation itself takes place on a national scale. Dr Hill suggested that with the right political will, holistic governance frameworks such as the Antarctic Treaty can transcend narrowly defined national interests. She also noted the example of the World Meteorological Convention, where the national interests of protecting life and property can indeed motivate international collaboration to manage, understand and predict highly connected systems such as the atmosphere. Similar arguments, noted Dr Hill, could be applied to the Ocean.

All agreed that the UN Decade of Ocean Science for Sustainable Development, launched in January 2021, provides an opportunity for new, more focused conversations around ocean governance, and that the global ocean community needs to consider whose voices, values and knowledge are included as we continue to work towards achieving the science we need for the ocean we want.

Our ongoing support of the Ocean Decade

As well as providing opportunities and spaces for debates and discussions around ocean governance the NOC is also supporting the Sustainable Development Goals by: