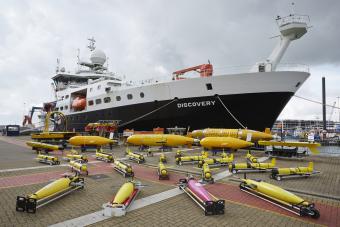 These fellowships will also help address key knowledge gaps in Atlantic Ocean variability and climate regulation, as well as assessing how the Atlantic will change in response to human activity.

The Climate Linked Atlantic Sector Science (CLASS) programme is a collaborative science programme, which builds on sustained ocean observation, world class model development, and state-of-the-art technology. The fellowships will help achieve the aims of this programme through offering early career researchers the opportunity to work with CLASS scientists, use the programme’s models, and join CLASS-funded research expeditions.

The fellowship awarded to Sarah Cryer, from the University of Southampton, will investigate how rivers contribute to coastal ocean acidification. This will involve testing innovative new sensors and platforms to determine whether they are able to monitor both hourly variations in acidity, as well as longer-term trends.

Euan Soutter, from the University of Manchester, has been awarded a fellowship to study changes to the transport and burial of ocean carbon in seafloor sediments, and the impacts of this on communities of life on the seafloor. Euan will be analysing sediment cores collected under a previous programme and stored at the British Oceanographic Sediment Core Research Facility (BOSCORF), based at the National Oceanography Centre (NOC).

A third fellowship has been awarded to Jade Hatton, from the University of Bristol, who will optimise a new sensor within an ocean glider to study the role of silicon in the growth of Atlantic phytoplankton. Jade will also look at the key role played by this phytoplankton in the global carbon cycle and the Atlantic ecosystem.

Hannelore Theetaert, from the Flanders Marine Institute, will be taking measurements in the North Atlantic to study the processes that control the uptake and storage of atmospheric carbon dioxide in the ocean. These measurements will be taken during an upcoming GO-SHIP research expedition.

CLASS is a five-year programme funded by the Natural Environment Research Council’s (NERC) Marine National Capability. CLASS is led by the NOC and is a collaboration with the Scottish Association for Marine Science (SAMS), Plymouth Marine Laboratory (PML), Marine Biological Association (MBA), and the Sea Mammal Research Unit (SMRU). The programme began in April 2018 and will run until April 2023.

Find out more about the CLASS programme.