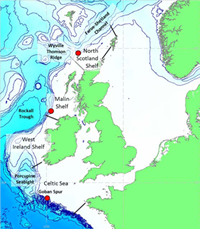 John has pioneered our understanding of how the dynamics of shelf seas operate.

Following a distinguished 35-year career working for NERC at IOS Liverpool, later to be re-branded the Proudman Oceanographic Laboratory and from April 2009, the National Oceanography Centre, John Huthnance retired in January 2013.

To celebrate John’s wide ranging scientific contributions to shelf sea dynamics a workshop will be held in Liverpool on 23 and 24 October 2013 at the Foresight centre, University of Liverpool.

John Huthnance joined the Institute of Oceanographic Sciences, Bidston in 1977 following the completion of his doctoral thesis at the University of Cambridge, a one-year postdoctoral (PDRA) position at the Scripps Institution of Oceanography and a one-year PDRA position and 2-year temporary lectureship in the Department of Oceanography, Liverpool University. During his thirty five year career at the laboratory it has seen two changes of name; the Proudman Oceanographic Laboratory, and currently, the National Oceanography Centre, following its merger with the NERC owned and managed part of the Southampton waterfront campus. Today, NOC conducts marine research from the deep ocean to the near shore region.

Without exaggeration, John has pioneered our understanding of how the dynamics of shelf seas operate. In recognition of John’s wide ranging research contributions to the “dynamics of shelf seas” we are inviting the marine community to join us in this celebratory workshop.

The workshop has four themes. A keynote speaker will introduce each theme.

We invite colleagues of John to attend the workshop and to contribute either a talk or a poster.