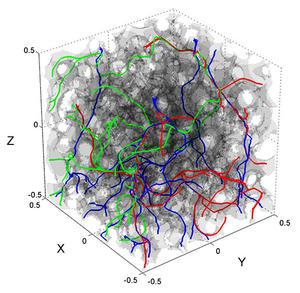 The discovery of a new fundamental rock property will improve estimates of underground resources, such as hydrocarbons and drinking water, as well as CO2 storage reservoir capacity.

The revelation that electricity can flow more easily through sedimentary rocks in the vertical, rather than horizontal, direction is contrary to established scientific wisdom. This finding will improve the interpretation of geological fluid flow from geophysical surveys.

Fluids and electrical currents can flow through sedimentary rock via a network of gaps in between the sediment grains, called pores. Because gravity applies a vertical force, when sediments are compacted into sandstone the horizontal pathways in the pore network become more compressed and contorted than their vertical counterparts. These differences mean that it is easier for fluids and electrical current to flow through the less contorted and compressed vertical pathways. Prior to this study it was thought the horizontal layering of sediments and the horizontal alignment of sedimentary grains would cause electricity to flow more easily in the horizontal direction.

This discovery, made by scientists at the National Oceanography Centre (NOC), was published in the journal Geophysical Prospecting in November. Earlier this week this study was awarded the EAGE’s Loránd Eötvös prize for the ‘best research paper in 2014’ due to its ground breaking nature.

Lead author, Laurence North from the NOC, explained “It was the development of world leading technology at the NOC that allowed us to make this discovery. There have been a number of studies that showed similar effects, yet scientists dismissed their own findings as experimental error. However, because the unique electrical resistivity measurement system and processing software that I developed at the NOC is so accurate, I knew that the data must be the result of a ‘real’ rock property. Explaining the result, however, took a real lightbulb moment”.

Co-author Angus Best, Head of Marine Geoscience at the NOC, added “because this is the discovery of a fundamental rock property, it will be extremely useful for sub-seafloor fluid flow research in general, as well as for commercial applications.

“We are very pleased to receive this prestigious award from the European Association of Geoscientists and Engineers, which gives wider recognition of the world-leading rock physics research we have been conducting at the NOC.

“We are already using the results and related novel technology to advance sub-seafloor fluid flow studies of Arctic methane hydrate dissociation and geological CO₂ storage, as well as engaging with hydrocarbon industry partners.”