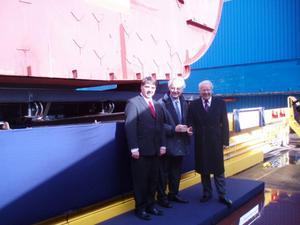 It is tremendously exciting to see the new Discovery beginning to take shape.

The construction of a state-of-the-art research ship for UK marine science reached a significant milestone in Vigo, Northern Spain, this week with the keel-laying ceremony for the new RRS Discovery.

RRS Discovery will provide a superbly equipped platform that will allow researchers to address some of the world’s most pressing environmental issues, investigating the oceans’ role in climate change, mapping underwater landslides and earthquakes and exploring unique and undiscovered ecosystems across the planet.

The £68 million contract for RRS Discovery is being delivered by shipbuilder, CNP Freire, SA, who have more than a century’s experience in building research, offshore, merchant and fishing vessels, specialising in those with high technological requirements. In 2006, Freire built a research vessel for the Consejo Superior de Investigaciones Cientificas, Spain’s national research council, and will shortly deliver a newly built oceanographic vessel to Qatar University. The company also has an excellent reputation for repair and conversion work.

The new research ship has been developed by Skipsteknisk AS, a leader in the design of sophisticated and noise-reduced research vessels. Skipstenisk AS also designed Discovery’s sister ship, the RRS James Cook.

National Oceanography Centre Executive Director, Professor Ed Hill, who attended the ceremony in Vigo with Edmund Wallis, Chairman of NERC, said “It is tremendously exciting to see the new Discovery beginning to take shape. This new ship, which the NOC will manage on behalf of the UK science community, will have a key role in our mission to understand the role of the oceans in the Earth system, and to carry out research that will deliver significant economic and societal benefits.”