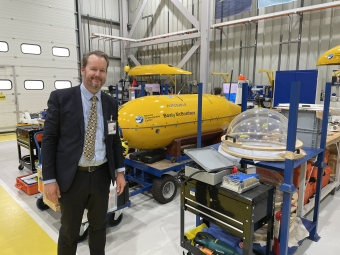 Mr Hamilton visited NOC to share information on the development of a new Marine Science Base and how the UK Government is providing investment in monitoring and protecting Pitcairn’s Marine Protected Areas (MPA).

With one of the largest MPAs ever designated at 842,000km2, the establishment of the Pitcairn Islands MPA in 2016 was a pre-cursor to the now more familiar 30×30 agenda, to protect 30% of the Worlds Ocean by 2030. Encompassing some of the most pristine waters on the planet and with a 99.5% no-take zone, the Pitcairn Islands MPA provides an opportunity for marine researchers to truly monitor bio-diversity and climate change indicators.

Mr Hamilton was introduced to some of the innovative technologies that NOC is developing and discussed how these could be used in supporting the delivery of the Pitcairn Islands MPA Management Plan. With support by the Blue Belt Programme in establishing the framework required to manage the MPA, the ambition of the investment in the new Marine Science Base will be to provide the infrastructure that will enable visiting scientists to undertake research that not only demonstrates the value of marine protection but also as a reference for climate change impacts.

The RRS Discovery, operated by NOC, recently embarked on a 9,000-mile CEFAS-led expedition to conduct an extensive scientific survey within the South Atlantic ocean – and could even discover new species in previously unexplored depths.