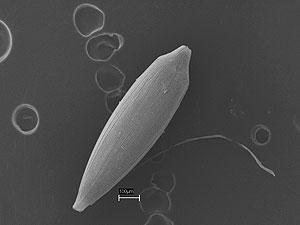 Although acantharians are known to contribute to organic matter transport at shallower depths, we were amazed to discover a high flux of their spore-like reproductive cysts in the deep ocean.

Scientists suspect that this is part of an extraordinary reproductive strategy, which allows juveniles to exploit a seasonal food bonanza.

The research shows that deep sedimentation of cysts during the spring delivers significant amounts of organic matter to the ocean depths, providing a potential source of nutrients for creatures of the deep.

“Although acantharians are known to contribute to organic matter transport at shallower depths, we were amazed to discover a high flux of their spore-like reproductive cysts in the deep ocean,” says PhD student Patrick Martin of the National Oceanography Centre.

Cysts were found in sediment trap samples recovered from a depth of 2000 metres in the Iceland Basin, a deep region of the Atlantic Ocean south of Iceland. The traps were deployed in 2006 from the Royal Research Ship Discovery to collect sinking organic-rich particles. Such particles comprise part of the biological carbon pump, whereby carbon ‘fixed’ from carbon dioxide by photosynthetic organisms in sunlit surfaces waters is exported to the deep ocean.

Although single celled and known mainly to specialists, acantharians are globally distributed and often very abundant. Adults are found mainly in the top 300 metres, where symbiotic algae living within them contribute to primary productivity through photosynthesis.

Uniquely, the spiny skeletons and cyst shells of acantharians are composed of crystalline strontium sulphate, known as celestite, precipitated from seawater in the upper ocean. Celestite is the densest known marine biomineral, but it readily dissolves in seawater, thereby releasing strontium back into the seawater.

“Celestite ballast causes rapid sinking. The cysts we found in the Iceland Basin are larger than reported from other regions, up to a millimetre long, and thus sink faster. We believe that this allows them to reach considerable depths before their celestite shells dissolve,” says Patrick Martin.

This is consistent with changes in seawater strontium concentration with depth, measured by other scientists in the Iceland Basin. Similar measurements suggest that acantharian cysts in the subarctic Pacific may also sink to great depths.

Acantharian cyst flux in the Iceland Basin was restricted to April and May. It contributed up to around half the particulate organic matter found in the traps during the two weeks of highest cyst flux, albeit with considerable variation between samples.

Evidence suggests that, at high latitudes, rapid, deep sedimentation of acantharian cysts recurs each spring. The cysts sink to depth to release gametes and then die. Juveniles may then descend to the seafloor before ascending to the surface as they mature.

The deep flux of cysts coincides with the spring bloom of phytoplankton, the tiny marine algae that dominate primary production in sunlit surface waters.

“We speculate that this is part of a reproductive strategy allowing juveniles to feed off the remains of phytoplankton, ‘phytodetritus’, that rapidly sinks to the seafloor following the spring bloom,” says Patrick Martin.

In that case, deep sedimentation of cysts could be regarded as an adaptation to life in highly seasonal environments, leading to the expectation that the phenomenon should occur in other high-latitude ocean regions.

This study was funded by the Natural Environment Research Council, UK, as part of the Oceans 2025 program.