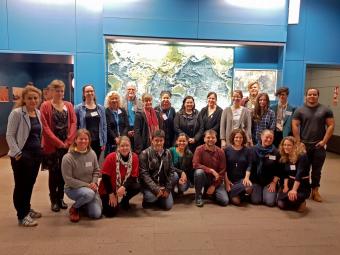 This week NOC Taxonomist Dr Tammy Horton joined twenty-six other deep-sea scientists from twelve countries for an international meeting in Frankfurt. The objective was to find a means of accelerating and sustaining the taxonomy that is fundamental for understanding the deep-sea environment. Delegates discussed strategies to tackle the increasing pressures faced by taxonomists, and called for improved collaboration and standardization of open-access data repositories, as well aas substantially increased funding for taxonomic projects and positions.

On returning from the meeting Dr Tammy Horton said “The need for technological development of biodiversity discovery in the deep sea is clear. A quarter of all species described on our planet are threatened with extinction due to human activities, yet most deep-sea animals are not yet even known to science.

The deep ocean, the largest environment on Earth, is one of the most diverse ecosystems where wondrously bizarre life forms abound. It is at risk from pressures including fishing, pollution, climate change and mining. There is a danger that large numbers of species will go extinct before they are even discovered. We urgently need to understand the deep-sea environment and the species that live there in order to conserve and manage it.

Taxonomists provide the critical baseline knowledge. Their discovery and description of unknown species is at the heart of biology.”

The World Register of Marine Species (WoRMS) Steering Committee meeting also took place this week on board the RRS Discovery.  WoRMS is a collaboration of taxonomists that provides an authoritative and comprehensive list of names of marine organisms.

The meeting was attended by taxonomists from around the world and by representatives from the National Oceanographic Library (NOL), based in the NOC’s Southampton site, the Biodiversity Heritage Library, and the Natural History Museum Library. The participants discussed future objectives of the WoRMS database, including improved collaborations with other global initiatives such as the Biodiversity Heritage library.

The meeting attendees also visited the NOL archives and the NOC Discovery Collections. Following the visit three loans of specimens from the NOC’s collections were arranged, which will likely result in the descriptions of a number of species new to science.

The finding of new deep-sea species during such a short visit (about 45 minutes!) provides a clear example of the importance of maintaining specimen collections and of supporting taxonomists.  Now the challenging work to scientifically determine and describe the new species begins!