A decade of discovery 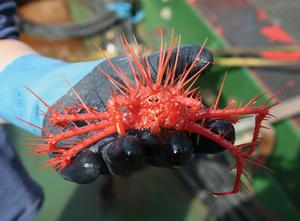 The Census of Marine Life has fostered collaborations with scientists around the world. No one country or organisation could cover this vast expanse that is the ocean.

Census of Marine Life reports after ten years of exploration.

During the past ten years deep ocean scientists at the National Oceanography Centre have contributed to the Census of Marine Life report which was published in London this week (www.coml.org).

This comprehensive study of life in the oceans has brought together scientists from around the world in a collaborative effort to detail life in the oceans – from the smallest microbe to the largest whale, from the surface waters to the deep abyss and from short-lived plankton to 6,000 year-old sea fans.

The first census shows that life in the ocean is richer, more connected and more impacted than ever expected. Some 2,700 scientists from over 80 institutes have been working together to build a baseline of the status of our seas. The National Oceanography Centre has played a significant role with research into the deep ocean – particularly the deep abyssal plains, continental margins, seamounts, hydrothermal vents and the mid-Atlantic ridge.

Dr David Billett said, “One of the key areas of interest for us is the impact of humans the deep ocean floor. Recent research in the North Atlantic has demonstrated that bottom trawl fishing has had ten times more impact on the seafloor than all other activities, such as drilling or cabling, put together. Deepwater corals, which provide habitats for hundreds of species, can be destroyed utterly by one pass of a trawl net weighted down by chains.”

Prof Paul Tyler has been involved in expeditions to hydrothermal vent sites around the world, including the Cayman Trough and the East Scotia Ridge. He is an expert on chemosynthetic fauna – animals that live in an ecosystem independent of sunlight, instead, thriving on the chemicals issuing forth from the vent themselves. He has led several investigations for ChEss (Chemosynthetic Ecosystem Science), a field project of the Census of Marine Life programme. In the New Year he heads to Antarctica again to the East Scotia Ridge to sample the animals living at the world’s most southerly vent fields.

Paul Tyler said, “The Census of Marine Life has fostered collaborations with scientists around the world. No one country or organisation could cover this vast expanse that is the ocean.”