Decadal Variability of the Atlantic Circulation from Surface Observations 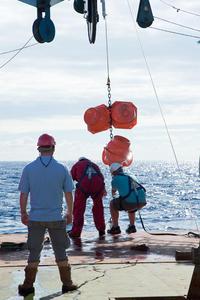 Scientists from NOC have led a study to infer variability of the sub-polar Atlantic Ocean Meridional Overturning Circulation using estimates of air-sea exchanges of heat and water at the ocean’s surface.

The scientific research paper describing the method and its application, ‘The Surface-Forced Overturning of the North Atlantic: Estimates from Modern Era Atmospheric Reanalysis Datasets’, has been published in the Journal of Climate.

The basis of the study is the influence of exchanges at the ocean surface on the Atlantic Meridional Overturning Circulation (AMOC) – the large-scale flow of water within the North Atlantic, characterised by the northward flow of warm, saline water which subsequently cools and sinks in the northern part of the basin before returning south at depth.

This flow of water plays a major role in transporting heat from the tropics to the latitudes of the British Isles. Climate models indicate that in years when the AMOC is particularly strong, northern Europe typically experiences warmer and wetter than average conditions.

Despite the AMOC’s importance for our changing weather and climate, direct observations from the ocean sub-surface of the subpolar AMOC are rather limited although this will change in the near future as a result of a major new observational programme, OSNAP, funded by NERC. Further south, since 2004 the dedicated RAPID project’s observing array has provided continuous AMOC observations in the subtropics at 26⁰ North and there are occasional snap-shots of the overturning strength at other latitudes from research cruises. However neither of these has provided insights into how the subpolar AMOC is currently changing and how important such changes are in terms of the longer-term decadal variability.

Addressing these issues became the focus of the research and ultimately the authors developed a method, cited in the recent IPCC report, to infer variability in the component of the mid-high latitude AMOC strength due to changes in the fluxes across the ocean’s surface. These air-sea fluxes include the exchange of freshwater – that is the difference between rainfall and ocean evaporation - and heat between the ocean and the overlying atmosphere.

The strength of this approach is that, unlike the direct sub-surface observations, there are decades of continuous estimates of air-sea fluxes. This opens up the possibility of reconstructing the history of recent AMOC variability and critically putting current changes in the context of those that have taken place over the last 30 years.

In the current piece of work, the authors considered how much diversity there is in the inferred AMOC from six different estimates of air-sea fluxes. These estimates are from state-of-the-art syntheses of observations and models known as atmospheric reanalyses. Their results revealed marked geographical differences. These have implications for how appropriate the method is in different regions.

Firstly, in the sub-polar region the different reanalyses all yielded estimates of average AMOC strength consistent with the available direct observations. The different reconstructions of recent AMOC changes were also similar. This suggests that the choice of reanalysis product does not critically limit the ability of the method to infer AMOC variability in this part of the Atlantic. The estimates suggest the sub-polar AMOC was anomalously strong in the mid-1990s, that it declined significantly between 1995 and 2005 and since then it has been returning to the long-term average.

Finally, in the subtropical regions the reanalyses yielded a large spread in the strength of AMOC and there was also disagreement between the inferred AMOC histories. As the estimated state of the AMOC is so dependent on the dataset used, the method cannot be reliably used to infer recent changes in the subtropical AMOC. The wide spread of results from the different reanalyses were shown to be due to the large range between the different estimates of subtropical surface heat flux. This emphasizes the need to redouble research efforts into quantifying the exchange of heat between the ocean and the atmosphere.