COP27 results in considerable steps forward for the ocean 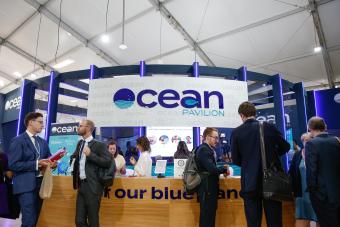 I am pleased that the COP process continues to acknowledge the importance of scientific evidence in informing climate actions.

While the United Nations Framework Convention on Climate Change Conference of the Parties (UNFCCC COP) has a way to go to achieve its core objective of preventing the global temperature from exceeding 1.5°C by the end century, COP27 marked a significant step forward for our ocean by providing, for the first time, inclusion into the overarching decision.

The final COP27 implementation plan agreed upon in Sharm El Sheikh in November continues to recognise ‘the importance of the best available science for effective climate action and policymaking’. It also represented progress for the ocean by recognising gaps in the global climate observing system and acknowledging the importance of ensuring the integrity of the ocean.

The ocean is mentioned on several occasions in the plan by highlighting “the importance of ensuring the integrity of all ecosystems, including in forests, the ocean and the cryosphere, and the protection of biodiversity” (noting decision).

For the first time, the ocean is also addressed in a dedicated sub-section in the final decision. It continues the momentum on ocean issues begun at COP26 in Glasgow through commitment to continue with a formal ocean and climate change dialogue process. Regarding the implementation of ocean-based climate solutions, the final decision ‘encourages Parties to consider, as appropriate, ocean-based action in their national climate goals and the implementation of these goals, including but not limited to nationally determined contributions, long-term strategies and adaptation communications;” (article 46).

This further recognises the portfolio of solutions that the ocean can provide to achieve the climate and sustainable development objectives. However, vigilance will be needed to ensure that only scientifically-proven ocean-based actions, that are climate-smart and biodiversity-positive, are put forth.

The global climate observing systems (which includes the global ocean observing system as a key component) also feature prominently in the plan, especially in article 26, which emphasises “the need to address systematic observation gaps, particularly in developing countries and for ocean, mountain, desert and polar regions and the cryosphere in order to improve understanding of climate change, climate-related risks and tipping points, and adaptation limits and to ensure enhanced delivery of climate services and early warning systems” and the text “notes with concern the existing gaps in the global climate observing system and recognises the need to enhance the coordination of activities by the systematic observation community and improve its ability to provide useful and actionable climate information for mitigation, adaptation and early warning systems, as well as information to enable understanding of adaptation limits and of attribution of extreme events”.

These developments build on the work done at COP26 a year prior and have shown that parties are considering new solutions for future climate goals.

Commenting on the ocean’s addition to the overarching decision, Professor Ed Hill CBE, Chief Executive of the National Oceanography Centre, said, “I am pleased that the COP process continues to acknowledge the importance of scientific evidence in informing climate actions, recognising the need to address systematic observation gaps and includes developing countries, the ocean, and other key parts of the earth’s system. This will help us further improve our understanding of climate-related risks and the tipping points’.

The prominence of the ocean continues to be pushed by NOC and others across the globe, leading to the first ever Ocean Pavilion at COP27. The product of a collaboration between many leading oceanographic institutions including NOC, Woods Hole Oceanographic Institution, the Scripps Institute of Oceanography, the French Institute for Marine Research, the American Geophysical Union, Plymouth Marine Laboratory and several other partners.

Situated in the Blue Zone, the pavilion hosted a full programme of scientific briefings that discussed digital twins of the ocean, blue carbon, ocean observations and ocean acidification and many more.

Throughout the two weeks, the Ocean Pavilion attracted some key figures in the industry, including John Kerry (U.S. Special Presidential Envoy for Climate) and Peter Thomson (United Nations Secretary General’s Special Envoy for the Ocean). In addition to this, many political leaders visited including UK government ministers Thérèse Coffey (Secretary of State for Environment, Food and Rural Affairs) and Grant Shapps (State for Business, Energy and Industrial Strategy), former Prime Minister Boris Johnson, as well as regional governors and ministers from COP27’s host nation, Egypt.

The pavilion was enormously successful as it raised the visibility of the ocean’s role in climate change and solutions and hosted a full programme of panel discussions over two weeks. It also provided an opportunity for industry leaders to come together with the shared goal of raising the profile of the ocean.

Professor Hill adds: “NOC was delighted to be a founding partner of the first-ever ocean pavilion at COP. It was a huge success, providing an energetic hub to initiate dialogue to highlight the role of the ocean in climate change and climate solutions. Encouragingly, it attracted huge political attention representing a significant development in the awareness of the ocean. We are looking forward to further consolidating our global alliance with our institutional partners and increasingly drawing attention to the significant role of our ocean in climate change. The COP texts have rightly highlighted the critical importance of climate observations including those in the ocean. These not only diagnose the ongoing rate of change but are critical to informing design of ocean actions and ensuring we have early warning of climate ‘tipping points’ which have the potential result in rapid changes and cascades of connected changes”.

Find out more about the NOC’s COP27 key messaging.