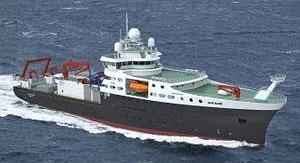 This new research ship will provide a state-of-the-art platform for researchers to address some of the world's most pressing environmental issues.

The UK’s leading environmental research organisation has commissioned a state-of-the art scientific research ship to replace the RRS Discovery, which was built in 1962 and is coming to the end of her scientifically useful working life.

The Natural Environment Research Council (NERC) has today awarded a contract to a Spanish shipyard – C.N.P. Freire, S.A. – under public procurement rules. The total project cost of bringing the new vessel into service is £75 million.

The ship will operate worldwide, enabling cutting edge scientific research. The ship's design will allow it to work in higher sea-states, complementing the work of NERC’s other research vessel, the RRS James Cook.

Chief Executive of the Natural Environment Research Council, Professor Alan Thorpe, explains why having a new ship is vital for environmental researchers “This new research ship will provide a state-of-the-art platform for researchers to address some of the world's most pressing environmental issues. It will enable them to make measurements of the oceans leading to vital evidence regarding climate change, marine ecosystems and underwater earthquakes and landslides, which will, in turn, deliver significant economic and societal benefits. I am very pleased that UK science will continue to have vital world-class facilities well into the future.”

The new vessel will take over the name ‘Discovery’ and will be operated by NERC’s National Marine Facilities Division, based at the National Oceanography Centre in Southampton.

The shipbuilder, C.N.P. Freire, S.A. has more than 100 years’ experience in building research vessels, offshore vessels, and merchant and fishing vessels, specialising in those with high technological requirements. In 2006 Freire built a research vessel for the Consejo Superior de Investigaciones Cientificas, the Spanish National Research Council, and has recently been awarded the contract for an oceanographic vessel for Qatar University. The company also has an excellent reputation for repair and conversion work.

The design of the new research ship has been developed by design company Skipsteknisk AS, a leader in the design of sophisticated and noise reduced research vessels. Skipstenisk AS also designed the RRS James Cook.