Climate change will alter waves along half the world’s coast 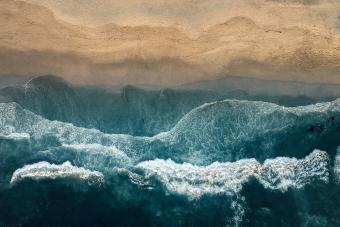 New research finds that a warming planet will also alter ocean waves along more than 50% of the world’s coastlines. This research, published in Nature Climate Change, has significant implications for coastal flooding and erosion.

As part of the Coordinated Ocean Wave Climate Project, ten research organisations, including the National Oceanography Centre (NOC), combined to look at a range of different global wave models in a variety of future climate scenarios, to determine how waves might change in the future.

NOC scientist Dr Lucy Bricheno, who contributed to this study, said "The National Oceanography Centre is proud to be involved in this worldwide collaboration in wave science: this paper helps us to understand and quantify the future changes in global wind-wave climate".

While they identified some differences between different models, they found if the 2℃ Paris agreement target is kept, changes in wave patterns are likely to stay inside natural climate variability.

However, in a business-as-usual climate, where warming continues in line with current trends, the models agreed the planet is likely to see significant changes in wave conditions along 50% of the world’s coasts, although these changes varied by region.

For example, if the climate warms by more than 2℃ beyond pre-industrial levels, southern Australia is likely to see longer, more southerly waves that could alter the stability of the coastline. For the UK coast the mean wave height is projected to decrease by about 10% by the end of the century under the most extreme global warming scenario.

Some areas will see the height of waves remain the same, but their wavelength or frequency will change. This can result in changes in the force exerted on the coast and any infrastructure there, and in some cases lead to increased wave-driven flooding.

Similarly, climate change induced alterations to the direction of waves can change how much sand they move along the coast. Infrastructure built on the coast, or offshore, is sensitive to these different characteristics of waves.

NOC scientist Professor Judith Wolf, also a co-author of the study, said “It is important to understand changes in the wave climate under climate change scenarios because waves are what cause damage to coastal defences and infrastructure, and erosion of natural coasts, beaches and ecosystems. They also contribute to increasing flood levels through wave setup, run-up and overtopping.”

The overarching pattern emerging from this study is that robust changes in projected mean wave heights are seen in some areas, with increases in the Southern Ocean and the tropical eastern Pacific, but decreases in the North Atlantic Ocean and portions of the northern Pacific Ocean. These changes are consistent with a relatively uniform decrease in projected surface wind speeds over the northern hemisphere extra-tropical storm belt, partly driven by the polar amplification of climate change.

Previous research has looked at the way waves have shaped our coasts through the past, which is used as a guide to understanding past sea levels. However, this research has often assumed that while sea levels might change, wave conditions have stayed the same. This same assumption is used when considering how climate change will influence future coastlines. Although, importantly, climate change can alter waves both through changing wind patterns, and through changes to the water depth at the coast through sea-level rise.