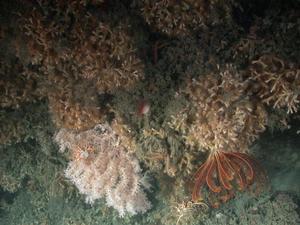 We expected to find something, but we had no idea it would be that much.

Bottom trawling fishing boats have devastated many cold water coral reefs along the margin of the North East Atlantic Ocean. Now, researchers have found large cold water coral colonies clinging to the vertical and overhanging sides of submarine canyons 1350 metres below the surface of the Bay of Biscay.

The overhanging canyon walls protect the coral from bottom trawling, providing a safe haven where it can flourish.

The study, reported in the journal PLoS One, is the first time such a large number of coral colonies have been found clinging to canyon walls. The densely-packed coral colonies covered several hundred square metres of cliff face, comparable in size to some of the richest cold water coral mounds found elsewhere along the margin of the North East Atlantic.

“We expected to find something, but we had no idea it would be that much,” says Dr Veerle Huvenne, a marine geoscientist at the National Oceanography Centre and lead author of the paper.

Cold water corals are widespread along the continental margins of the North East Atlantic. Large cold water coral reefs exist off the coasts of the UK, Ireland and Norway and support thriving marine ecosystems. “Because they create structure on the sea bed they provide a habitat for lots of sea life. They’re real biodiversity hotspots,” says Huvenne.

However, bottom trawling fishing boats, which drag heavily-weighted nets along the seabed, have damaged or destroyed many cold water coral reefs.

The newly-discovered cliff-dwelling corals could help repair those damaged areas. Corals need to reach a certain level of maturity before they can reproduce sexually. When they do, they produce free-swimming larvae which can repopulate damaged or destroyed reefs. The shelter afforded by the overhanging cliffs gives the coral the opportunity to develop undisturbed.

To make their discovery, the researchers modified the deep-water remotely operated vehicle (ROV) Isis. They repositioned its multi-beam echosounder, which is typically used to study the seabed, to point forwards. In this position it could map the canyon walls ahead of the ROV.

Yet the work was not without hazards. “It was very complicated terrain,” says Huvenne. “So there was a danger of getting the equipment stuck.”

An ROV like Isis usually finds its route using bathymetry (depth) data from the research ship on the surface but, because of the overhanging cliffs, this wasn’t always accurate in the canyon. Instead, the skilled pilots had to rely on the ROV’s own instruments to feel their way along. Isis also had to avoid discarded fishing gear in which it could have become tangled as it approached the cliff face.

Cold water corals are found in large reefs or mounds at depths from just a few metres to more than five kilometres. Most coral species need a solid substrate, such as rock, to grow on, and a regular supply of organic particles on which to feed.

The canyon habitat provides both. The rocky wall offers secure anchor points and the shape of the canyons means they funnel a steady stream of food past the corals.