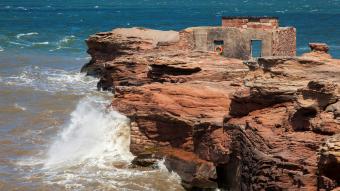 A new citizen science project launched today is inviting the public to help recover data from historic tide gauge ledgers from the North West of England and convert it into usable data by scientists.

NOC’s Head of PSMSL and Marine Data Manager, Elizabeth Bradshaw, is coordinating the project, and commented “Around 3 million people live near the coast in the UK, and with global sea level rising, we need long records to be able to investigate how local tides and sea level are changing. One way this can be done is by recovering data from old documents. In this project, we are trying to convert data from old tide gauge ledgers from two locations in the North West of England into data usable by scientists.”

The first ledgers, comprising of around 16,000 pages, focus on two locations: George’s Pier in Liverpool, now the site of the Cunard Building, and Hilbre Island, a tidal island in the Dee Estuary, NW of Wirral.

The ledgers were written in the 19th Century using values read from charts. These charts were produced by tide gauges, which automatically recorded the state of the tide. There are over 200 ledgers in the archives at the National Oceanography Centre.

Volunteers can participate in the project through the Zooniverse website, and undertake as much or as little as they like. The task is simple, view images of the hand-written ledgers and add the figures you see into the corresponding columns on the online form.

The ledgers show little of the individuals who kept them, but it is known that a Lewis Jones, originally from Anglesey, Wales, kept the Hilbre Island records during his job as Telegraph Station Keeper employed by the Mersey Docks and Harbour Board, between 1888 and 1923, as there is mention in the tide gauge ledgers of when he was absent due to sick leave.

Read more about the history of tidal science in Liverpool on our website Tide and Time.