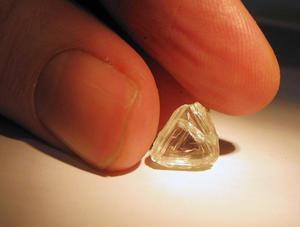 Scientists based at the National Oceanography Centre, Southampton have discovered a previously unrecognised volcanic process, similar to one that is used in chocolate manufacturing, which gives important new insights into the dynamics of volcanic eruptions.

The scientists investigated how a process called ‘fluidised spray granulation’ can occur during kimberlite eruptions to produce well-rounded particles containing fragments from the Earth’s mantle, most notably diamonds. This physical process is similar to the gas injection and spraying process used to form smooth coatings on confectionery, and layered and delayed-release coatings in the manufacture of pharmaceuticals and fertilisers.

Kimberlite volcanoes are the primary source of diamonds on Earth, and are formed by gas-rich magmas from mantle depths of over 150 km. Kimberlite volcanism involves high-intensity explosive eruptions, forming diverging pipes or ‘diatremes’, which can be several hundred metres wide and several kilometres deep. A conspicuous and previously mysterious feature of these pipes are ‘pelletal lapilli ’ — well-rounded magma coated fragments of rock consisting of an inner ‘seed’ particle with a complex rim, thought to represent quenched magma.

These pelletal lapilli form by spray granulation when kimberlite magma intrudes into earlier volcaniclastic infill close to the diatreme root zone. Intensive degassing produces a gas jet in which the seed particles are simultaneously fluidised and coated by a spray of low-viscosity melt.

In kimberlites, the occurrence of pelletal lapilli is linked to diamond grade (carats per tonne), size and quality, and therefore has economic as well as academic significance.

Dr Thomas Gernon, Lecturer in Earth Science at the University of Southampton, says “The origin of pelletal lapilli is important for understanding how magmatic pyroclasts are transported to the surface during explosive eruptions, offering fundamental new insights into eruption dynamics and constraints on vent conditions, notably gas velocity.”

“The ability to tightly constrain gas velocities is significant, as it enables estimation of the maximum diamond size transported in the flow. Gas fluidisation and magma-coating processes are also likely to affect the diamond surface properties.”

Dr Gernon and colleagues studied two of the world’s largest diamond mines in South Africa and Lesotho. In the Letseng pipe in Lesotho, pelletal lapilli have been found in association with concentrations of large diamonds (up to 215 carat), which individually can fetch up to tens of millions of pounds. Knowledge of flow dynamics will inform models of mineral transport, and ultimately could improve resource assessments.

Dr Gernon, who is based at the Southampton waterfront campus, says “This multidisciplinary research, incorporating Earth sciences, chemical and mechanical engineering, provides evidence for fluidised granulation in natural systems which will be of considerable interest to engineers and chemical, pharmaceutical and food scientists who use this process routinely. The scale and complexity of this granulation process is unique, as it has not previously been recognised in natural systems.”

The paper ‘The origin of pelletal lapilli in explosive kimberlite eruptions’ is published in the latest issue of Nature Communications.