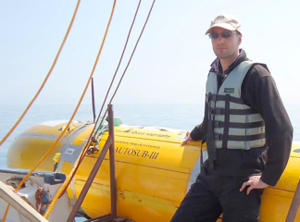 The first Chief Scientist for the national facility developing and providing autonomous vehicles for UK marine research has been appointed.

Dr Russell Wynn will act as the focal point between the Marine Autonomous and Robotics Systems (MARS) group - which went live in April 2012 at the National Oceanography Centre (NOC) - and its user community.

MARS was set up as part of NOC’s National Marine Facilities Sea Systems to provide autonomous and robotic systems on behalf of the Natural Environment Research Council (NERC). By 2016 it aims to be recognised as the world leader in the integrated provision of autonomous vehicles for marine science, characterised by effective deployments, novel capabilities and strong partnerships.

In establishing MARS, NOC brought its Autosub 3, Autosub 6000 and Long-range AUVs together with its fleet of 11 gliders, and has recently incorporated the Isis remotely operated vehicle (ROV) team. Initially formed under the leadership of Professor Gwyn Griffiths, his recent retirement created the opportunity to establish the new, part-time position of Chief Scientist.

Russell brings a wealth of experience in the use of autonomous systems for science, having personally led or participated in a number of projects using AUV, ROV and glider technology. He currently leads the NOC Marine Geoscience research group, which is a major user of MARS infrastructure, and he plans to draw in other appropriate scientific expertise from across NOC as required.

Russell said “I am delighted to be appointed as the first Chief Scientist of MARS, acting as a conduit for information and ideas between MARS, its scientific user community and key stakeholders, such as Defra. I have recently worked with many of the MARS team at sea and on land, and am now looking forward to promoting and representing this talented group in my new role.”

Russell joins at an exciting time with substantial capital investment of £3.3 million already provided by the Department for Business, Innovation and Skills (BIS) in 2012, while NERC has partnered with the Technology Strategy Board and the Defence Science and Technology Laboratory to run a £1 million Small Business Research Initiative to develop new unmanned surface vehicle concepts.

More recently it has been announced that NERC will receive capital funding of £10 million over the next two years for research and technology development of marine robotics as part of the “Eight Great Technologies” initiative, announced by the Science Minister, David Willetts, on 24 January. This £10 million investment provides an excellent opportunity for the UK to reinforce its expertise in marine robotics, and will enable NERC to engage with UK industry to take relevant technologies forward. MARS are currently working with the NERC community and potential industry partners to develop a roadmap for the use of this funding, and Russell will be integral to this process.