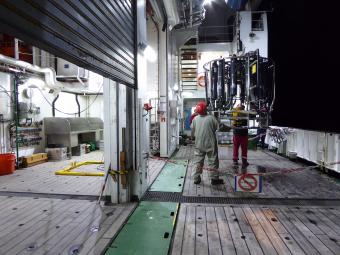 A change in the routing of fresh water coming from the Arctic has led to a remarkable reduction in salinity in the North Atlantic Ocean west of the UK, according to research published this week in Nature Communications.

An enormous area between UK and Iceland had record-breaking low salinity at the surface by 2016 – the lowest since records began in 1895.

Lead author, Professor Penny Holliday from the National Oceanography Centre (NOC), said “This is the first time the physical process causing this reduction in salinity has been identified. This helps us build a picture of the factors influencing environmental conditions, including looking to see whether existing models can reproduce it.”

“We care about the environmental conditions because they can impact ecosystem health, and knowing how things are changing is a key step towards managing our marine resources sustainably.”

Led by NOC scientists and co-authored by the Scottish Association for Marine Science (SAMS), this study shows that in 2012 to 2016 unusual wind patterns forced Arctic fresh water carried by the Labrador Current away from the eastern North American continental shelf. The cold, fresh water was directed into the North Atlantic Current which carried it towards the UK and Iceland.

Recent research has suggested that the ‘cold blob’ was caused by a combination of high heat loss from the ocean surface to the atmosphere and by a slow-down of a large-scale system of ocean currents carrying heat northwards, referred to the Atlantic Ocean Atlantic Meridional Overturning Circulation (AMOC).

This new study emphasises the importance of changes in the local currents of the subpolar region, and in particular in the pathways of fresh water from the Arctic, in changing the environmental conditions of the North-East Atlantic Ocean.

The change in the pathway of the Arctic water carried by the Labrador Current has implications for the North West Atlantic too; the regions that were receiving the cold, fresh and nutrient-rich Arctic water before 2012 include the Gulf of Maine, which has experienced damaging marine heatwaves and high salinity in recent years.

Professor Penny Holliday explains “Changes in environmental conditions in the eastern North Atlantic and in the Gulf of Maine have recently been attributed to changes in the AMOC and local heat loss. This new study shows the importance of winter wind patterns and local ocean circulation changes in determining the fate of Arctic waters and the subsequent environmental change.”

These findings used long-term data sets from on-going research expeditions in the North Atlantic, such as along the Extended Ellett Line, or the OSNAP programme.

This research forms part of the Blue-Action project, which aims to understand and simulate links between the Arctic and the global climate system, and the Arctic’s role in generating weather patterns associated with hazardous conditions and climatic extremes.