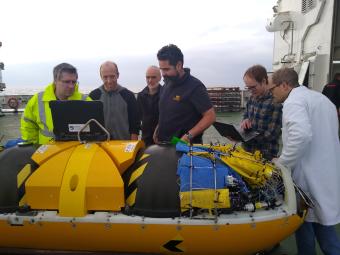 Oceanography is a science that is highly dependent on observations and measurements to gain a better understanding of our changing seas.

NOC’s Ocean Technology and Engineering (OTE) team are at the forefront of innovation in designing, creating and using novel sensors and instruments to collect these vital data, and continue to push boundaries.

Lab-on-Chip (LOC) sensors are at the cutting-edge of ocean sensing technology. With reduced power consumption, cost and size compared to more traditional systems, longer deployments on a vast range of oceanographic platforms are now possible, enabling the advancement of scientific research undertaken in the most extreme marine environments.

In this podcast we go back to the future and hear from Dr Alex Beaton about the milestones of Lab-on-Chip innovation since it’s conception in 2012.

In 2012, the first paper proving the innovative LOC sensor worked was published by NOC, paving the way for ten further years of exciting development milestones. To celebrate this achievement as part of NOC’s Marine Autonomy Technology Showcase (MATS), we’re looking back at some of the most momentous innovations in LOC technology from the past ten years and beyond.

The beginnings of LOC for chemical oceanography 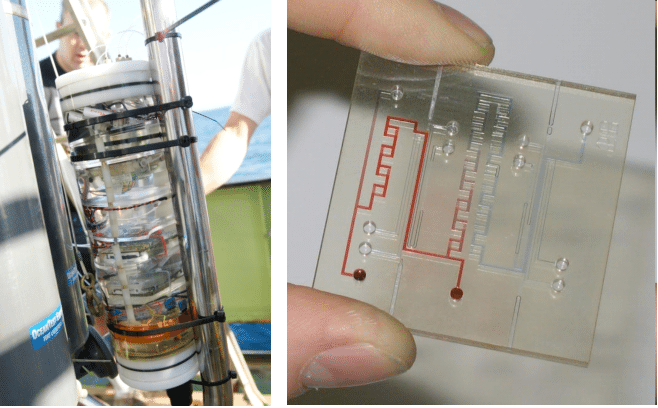 Research leading to the LOC technology we see today began even further back than ten years. In 2002, research began into the use of small channels (typically one-fifth of a millimetre in width) with the goal to make underwater sensors to measure seawater chemistry. A collaboration between NOC and the University of Southampton investigated whether biological growth (biofouling) on such small channels would prevent their use. These first experiments used channels made in silicon and glass using classical silicon micromachining – similar to the processing technology used to make computer chips. Initial experiments showed that if kept in the dark, these channels were surprisingly resistant to biofouling, a result that motivated the team to continue research.

In 2007 the University of Southampton and NOC begun a £2M EPSRC project called Rugged MicroSystem Technology. This developed the first sensors using polymers (plastics) to create a detection “chip” containing the channels and optics for absorption (colour intensity) based chemistry measurement techniques. This chip was also used as an endcap of containers housing the electronics, which were also covered in oil that protected the electronics from seawater and pressure. 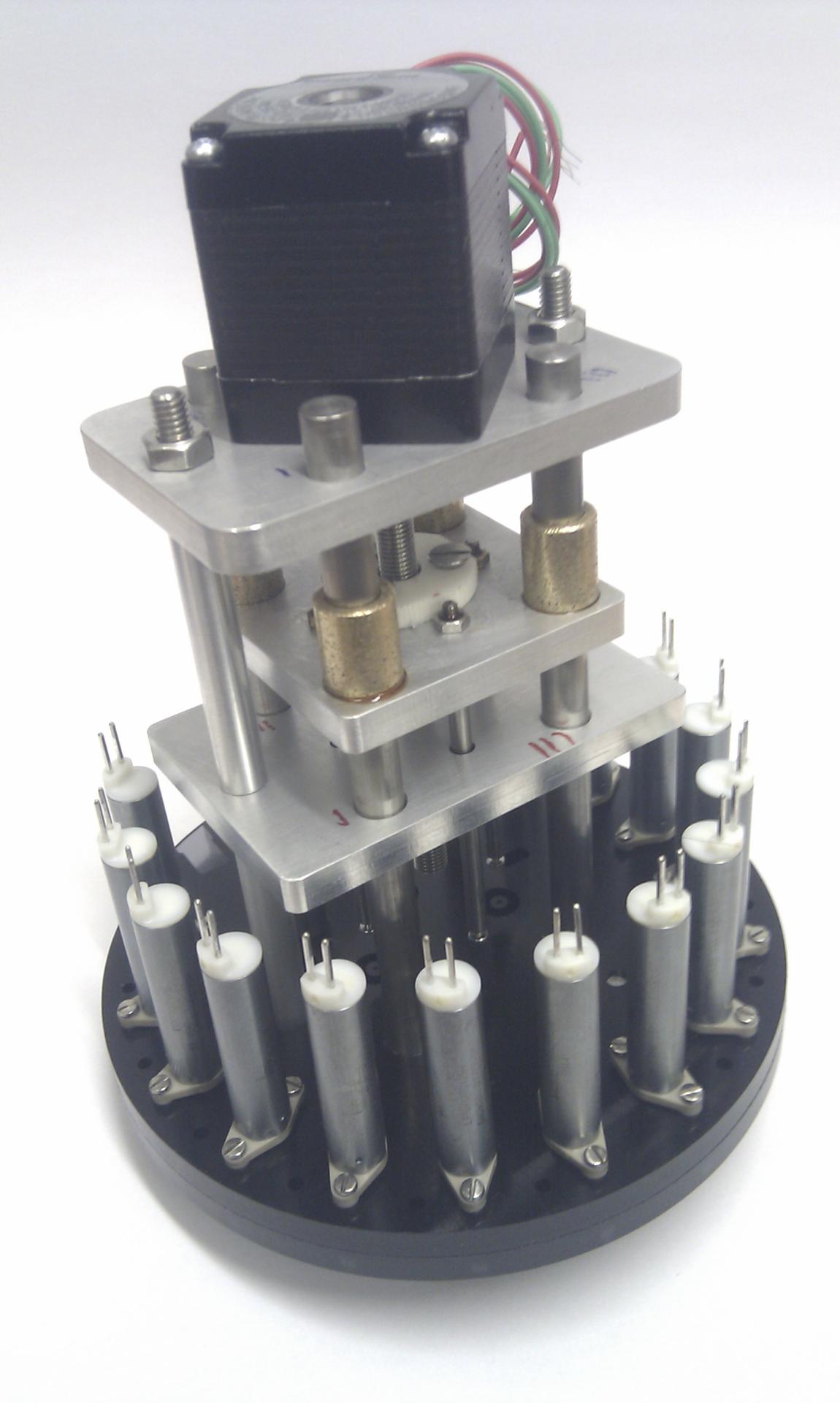 The first successful deployments of the LOC nutrient sensor platform took place in Southampton Water in 2011 and 2012. The nitrate and nitrite sensors used microfluidics combined with sensitive chemical analysis techniques to make high quality in situ measurements of nutrient concentrations in the estuary over several weeks. Over the next ten years the LOC sensor platform would continue to develop to measure a wide range of chemical parameters, expanding capabilities for more cost effective, and carbon efficient ocean science.

The robustness and low temperature performance of the LOC sensors was put to the test in 2013 and 2015 when they were deployed to measure nitrate in glacial meltwater draining from the Greenland Ice Sheet. In collaboration with the University of Bristol, sensors were deployed in proglacial meltwater streams close to Kangerlussuaq and Narsarsuaq in Greenland. The liquid reagents were modified with antifreeze so that they remained liquid at low temperatures.

In 2014 the LOC chemical sensor platform reached new depths when we re-designed it to facilitate deployment in the deep sea and on autonomous vehicles. 2015 saw the first successful deployment of a LOC sensor on an underwater glider. The sensor was integrated into a Kongsberg Seaglider, and was used to collect nitrate profiles in the Celtic Sea as part of the Shelf Seas Biogeochemisty programme.

This was also the first deployment below 1,000m on a CTD (conductivity, temperature, depth) instrument. CTD measurements are fundamental in understanding the physical structure of the ocean but also provide valuable contextual information for other co-located biogeochemical measurements. These deployments subsequently took place with phosphate and pH sensors.

LOC on the world stage

In 2014, NOC scientists and engineers visited the USA to take part in a high-profile international competition to develop pH sensors to measure changes in the acidity of the ocean. NOC was one of only two organisations representing the UK in the Wendy Schmidt Ocean Health XPRIZE, which is offered a total prize fund of (US) $2M for the development of accurate and affordable ocean pH sensors to improve our understanding of ocean acidification.

The four-phase competition attracted major players from the scientific community around the world and there are twenty-three organisations taking part. The pH sensor entered by the team was very small in size, and based on a microfluidic design which requires very small volumes of seawater to generate a reading. It was also designed as an autonomous system able to operate on a number of oceanographic platforms and down to depths of several thousand metres.

The ability to have long term unattended deployments in remote locations was one of the key goals when developing the LOC sensor platform. This was realised in 2015 when LOC nitrate sensors were successfully deployed for one year on moorings in Fram Straight. This was followed in 2018–2020 with a deployment just over a year-long of LOC sensors on a mooring in the south Pacific as part of the CUSTARD project.

The number of LOC sensors on a deployment scaled up significantly in 2019 when for the first time we operated 25 simultaneously as part of the STEMM-CCS project. Before the project, a typical deployment involved two to four LOC sensors; making the jump to deploying 25 in one experiment a huge change in scale. The STEMM-CCS project created novel technology, including many new LOC sensors, to monitor the integrity of offshore CO2 storage facilities. The main field campaign of the project saw the 25 LOC sensors operating simultaneously in the North Sea, measuring 5 different parameters. We deployed them on a variety of platforms including several landers, an ROV, and a ship’s underway. 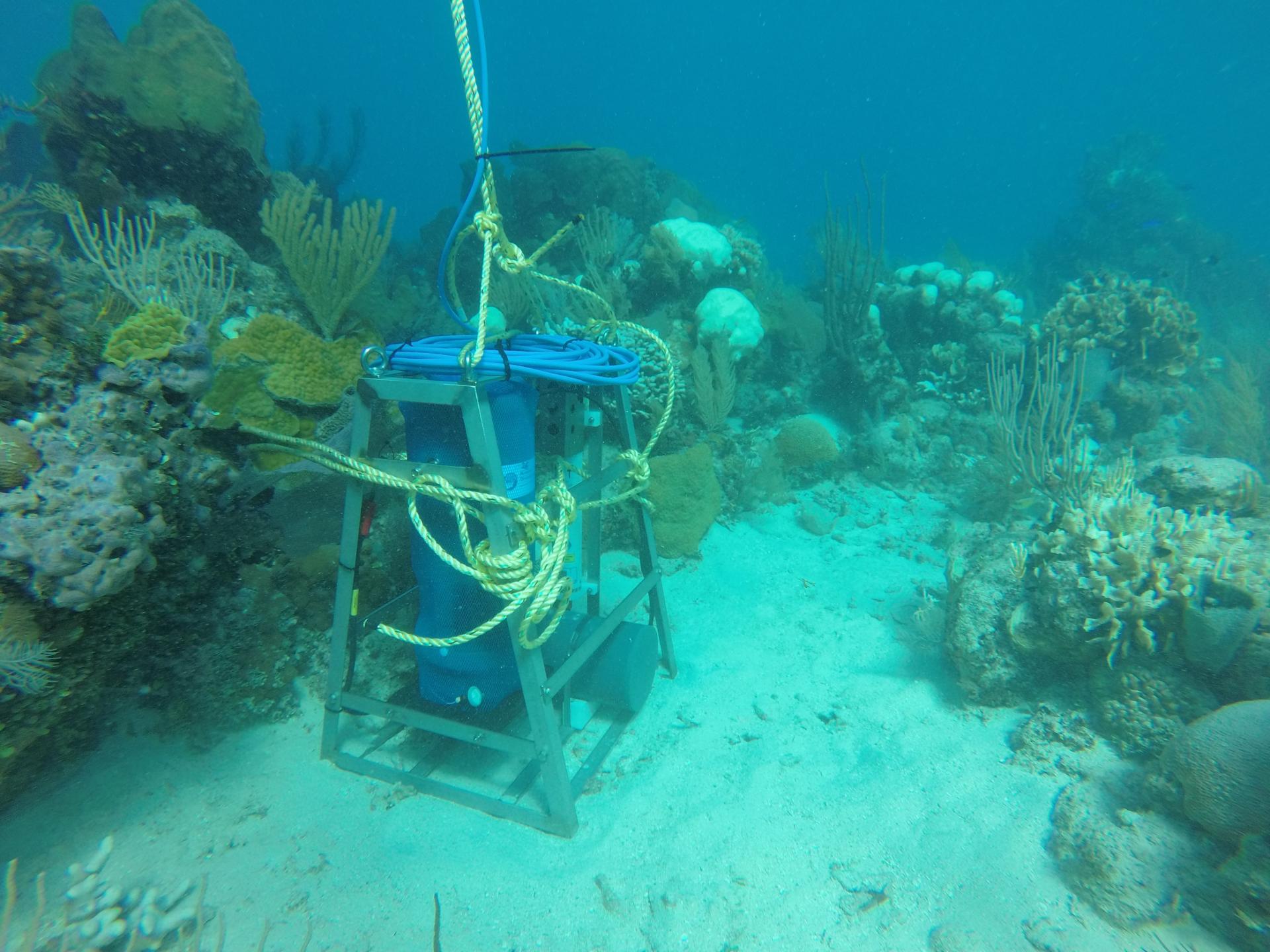 In 2019, we provided an innovative pH LOC sensor to the Commonwealth Marine Economies (CME) Programme, which helped to build ocean sensing capacity in small island developing states. The project first assisted the Belize Coastal Zone Management Authority and Institute (CZMAI) through the installation of the sensor, which can measure in real-time (every two hours) the acidity, temperature, salinity and oxygen of sea water. The sensor was initially piloted in October 2019 and was subsequently installed at its permanent location in November 2019. It has been providing vital data for analysis ever since.

The installation of the LOC technology enabled Belize to collect essential consistent data needed for important marine environment policy decisions. The deployment of the pH LOC sensors has since been expanded to Seychelles, Fiji and Dominica. 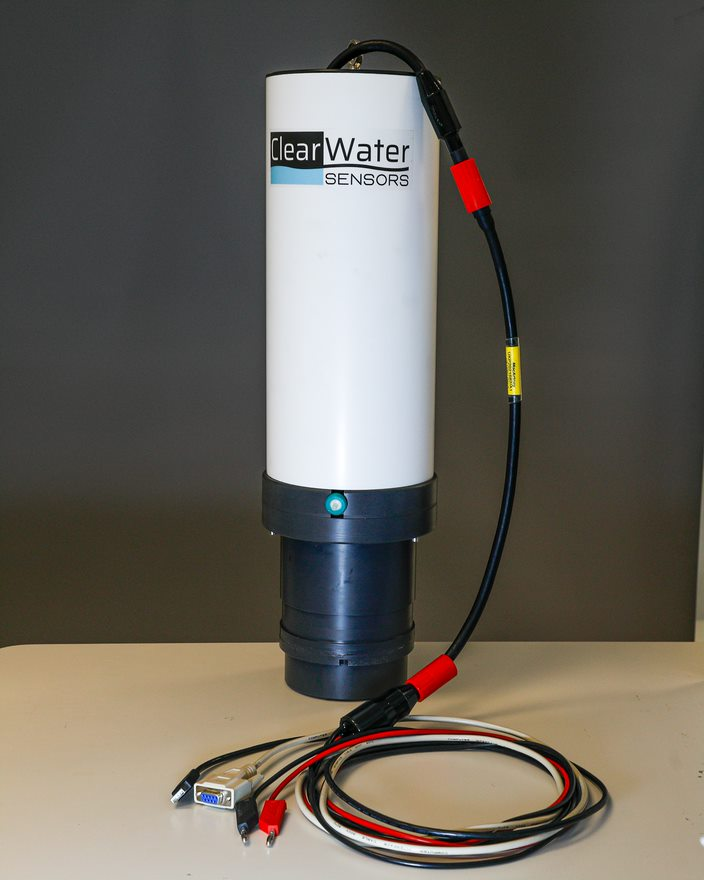 Select types of LOC chemical sensor technology and their underpinning intellectual property was successfully licensed for commercial supply from NOC and the University of Southampton in 2019. This led to the formation of a start-up company now known as ClearWater Sensors Ltd. Since then, empowered by partnership, the company has gone international, with a total of five commercial sensor types (nitrate/nitrite, phosphate, silicate, iron and pH) being developed and shipped to customers worldwide and to regulatory bodies, aquaculture, researchers and water utilities. Our partnership with ClearWater Sensors in the Horizon Europe project “GEORGE” will develop a new generation of high-performance sensors for the ocean carbonate system. 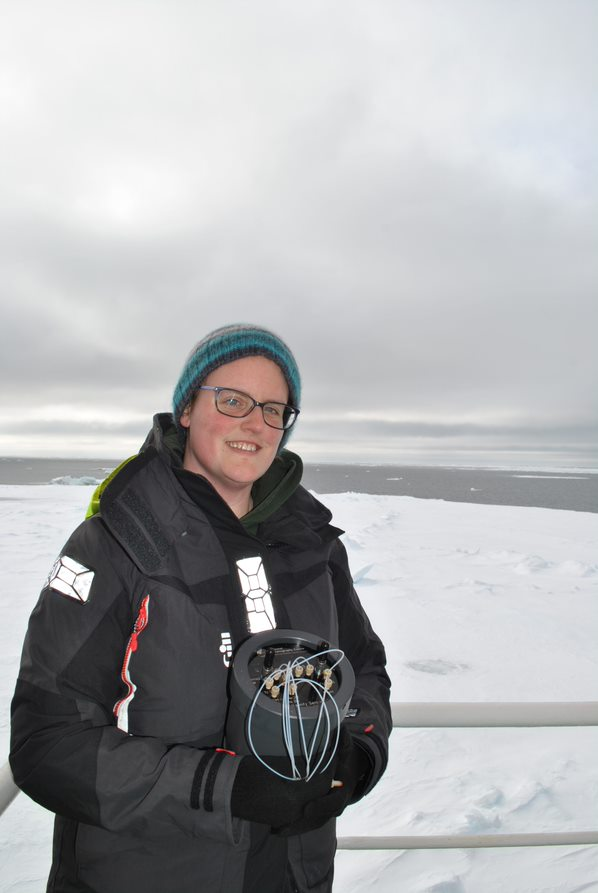 In 2021, the PS124 expedition onboard the RV Polarstern saw many firsts for LOC technology. The instruments provided the first nutrient and carbonate data from water behind a freshly created iceberg, which had just broken off the continental shelf. This was also the furthest south deployment to date of the technology (down to 77°S), and was also the first time the instruments were used to measure benthic fluxes by their integration onto a benthic chamber system. 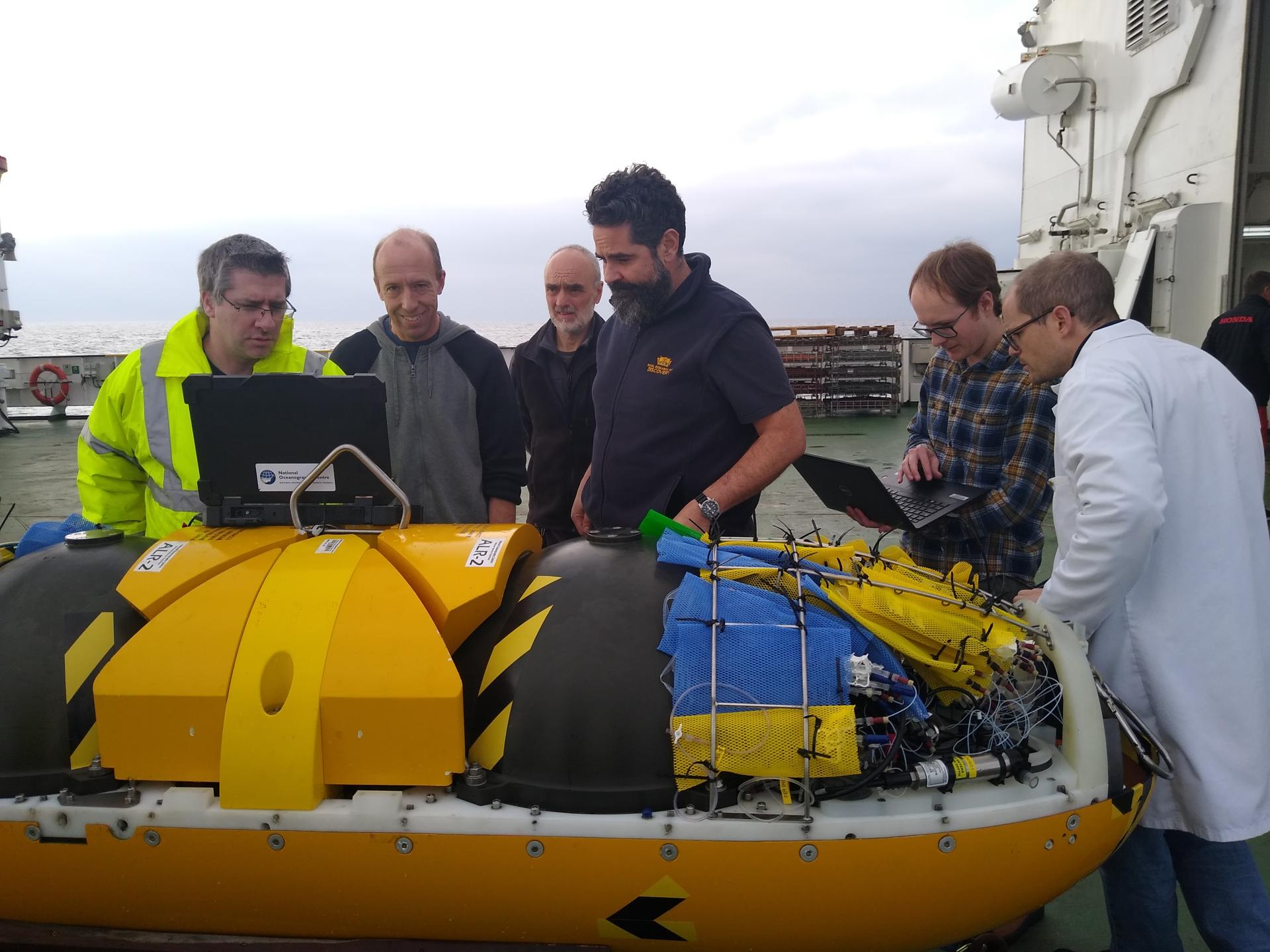 In March 2022, nine types of LOC systems were simultaneously deployed as part of the DY149 expedition onboard the RRS Discovery. The sensors measured a wide range of nutrients (nitrate, nitrite, phosphate, silicate, iron) and components of the carbonate system (pH, total alkalinity, dissolved inorganic carbon), which is crucial for advancing our knowledge of the oceans changing environment and how marine ecosystems are responding.

The expedition, which formed part of the NOC-led Oceanids programme, compared the new LOC sensors to more traditional sensor methods on Autosub Long Range (ALR), also known as Boaty McBoatface. The trials proved the powerful new capability for simultaneous and autonomous biogeochemical sensing in the ocean.