Carbon release and global warming now and in the ancient past 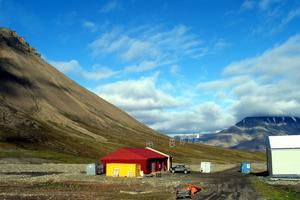 Our findings suggest that humankind may be causing atmospheric carbon dioxide to increase at rates never previously seen on Earth.

The present rate of greenhouse carbon dioxide emissions through fossil fuel burning is higher than that associated with an ancient episode of severe global warming, according to new research. The findings are published online this week by the journal Nature Geoscience.

Around 55.9 million years ago, the Earth experienced a period of intense global warming known as the Palaeocene–Eocene Thermal Maximum (PETM), which lasted for around 170,000 years. During its main phase, average annual temperatures rose by around 5°C.

Scientists believe that the warming may have been initially triggered by an event such as the baking of organic-rich sediments by igneous activity that released the potent greenhouse gas, methane. This initial temperature increase warmed ocean bottom waters which allowed the break down of gas hydrates (clathrates), which are found under deep ocean sediments: this would have greatly amplified the initial warming by releasing even more vast volumes of methane. As the methane diffused from the seawater into the atmosphere it would have been oxidised to form carbon dioxide, another potent and longer-lived greenhouse gas.

Adam Charles and his PhD supervisor, Dr Ian Harding, both palaeoceanographers at the University of Southampton’s School of Ocean and Earth Science (SOES) based at the National Oceanography Centre, Southampton, co-authored the report. Dr Harding said “The PETM has been seen by many as a natural test bed for understanding modern man-made global warming, despite it not being a perfect analogy. However, the total amount of carbon released during this climatic perturbation and its rate of release have been unclear.”

To help fill this gap in knowledge, the researchers measured carbon isotope ratios of marine organic matter preserved in sediments collected in Spitsbergen. The sedimentary section is important because it records the entirety of the PETM, from its initiation to through the recovery period, and as such is the most complete record of the warming event so far known in high northern latitudes.

Based on their carbon isotope measurements and computer simulations of the Earth system, the researchers estimated that the rate of carbon emissions during the PETM peaked at between 300 million and 1,700 million metric tonnes per year, which is much slower than the present carbon emission rate.

“Our findings suggest that humankind may be causing atmospheric carbon dioxide to increase at rates never previously seen on Earth, which would suggest that current temperatures will potentially rise much faster than they did during the PETM,” concluded Dr Harding.