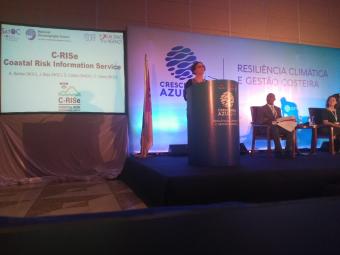 Earlier in the week NOC scientist, Dr Amani Becker, presented on ‘Application of Satellite Altimetry as a Tool for Coastal Risk Management in the South West Indian Ocean’ at the Crescendo Azul conference in Maputo, Mozambique.

C-RISe is a 3-year project delivering access to satellite-derived data for the South West Indian Ocean on sea level, wind and waves, with associated capacity building, to enable stakeholders to improve resilience to coastal hazards. It involves an international partnership of 11 organisations, led by SatOC, with the NOC contribution drawn from the satellite oceanography, sea level and business development teams (PI: Christine Sams).

The Crescendo Azul conference was organised by the Mozambique Government, featured an opening address by President Filipe Jacinto Nyusi, and was the first of its kind to be held in the country. It was intended as a platform to promote innovation, scientific and technological research in the oceans and blue economy with the objective that this could become a lever for Mozambique’s development. There was a particular emphasis on UN Sustainable Development Goal 14 and, following the devastation caused by cyclones Idai and Kenneth this year, vulnerability to climate change.

C-RISe has already provided training to 68 participants in Madagascar and Mozambique and delivered 19 Use Cases, which are applications of earth observation data to meet local user needs. In January this year the project was awarded an extension from the UK Space Agency to engage with partners in Mauritius in addition to the original three countries of Madagascar, Mozambique and South Africa.

C-RISe will also feature strongly at this year’s WIOMSA (Western Indian Ocean Marine Sciences Association) symposium, to be held from the 1st to 6th of July in Mauritius, with 13 abstracts accepted. In addition, the C-RISe team are holding a mini-symposium as part of the meeting, to bring together stakeholders and scientists with the aim of building a self-supporting regional network in the application of satellite data for decision support and management of coastal areas to improve resilience and reduce risk.