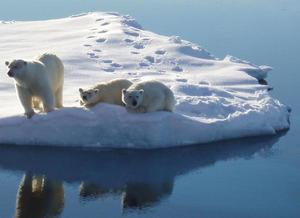 The retreat of Arctic sea-ice in recent years and evidence of increased plankton activity have brought Arctic Ocean ecosystems to the centre of attention.

Increasingly large areas of the Arctic Basin are being exposed to sunlight, which promotes intense phytoplankton blooms during summer months. This is encouraging some to think that a northward expansion of fisheries will automatically follow.

But can such increased productivity be sustained?

To address these uncertainties, ocean modellers from NOC Southampton have been working to compare the way in which regional and global ocean models describe present day Arctic Ocean ecosystems and the physical factors that control them. This work has been done in collaboration with researchers from Los Alamos National Laboratory (USA), International Arctic Research Centre (University of Alaska, USA), Polar Science Centre (University of Washington, USA), and Environment Canada (Canada).

Until recently, Arctic Ocean ecosystems received little attention from modellers because of the Arctic Basin’s status as a relatively unproductive area. This biological inactivity stems from the region’s lack of nutrients, near-complete cover of sea-ice and polar night conditions during the winter months. For modellers studying the biological productivity of the World Ocean, the Arctic Ocean has rarely been a focus of attention.

The two factors that control the amount of phytoplankton present are sunlight and nutrients. The Arctic Ocean has very stable vertical stratification that prevents mixing up of deep, nutrient-rich waters. Significant inputs of freshwater from rivers and meltwater from ice act as a freshwater slick – or lid – preventing deeper nutrient-rich waters coming to the surface, with the result that the surface layers of the Arctic Ocean are very poor in nutrients.

All five models participating in the study showed similar and realistic spatial patterns of plankton productivity. However, the models disagreed on the fundamental question of which factor – light or nutrients – was most important for controlling present day Arctic productivity. At present, light and nutrient limitation are tightly coupled together because both are largely driven by the sea-ice. But if the retreat of Arctic sea-ice continues into the future as currently expected, the link between sea-ice and nutrient levels will weaken and the predictions of the models will diverge.

Further, they caution against the popular view that increased light availability in the ice-free Arctic will simply translate into increased biological productivity that will, correspondingly, promote the northward expansion of fisheries. Arctic productivity may instead respond quite differently because of the complex impact of climate change on nutrient availability.