Blogging from the Southern Ocean 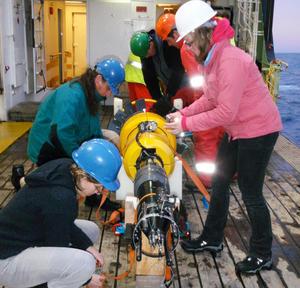 The RRS James Cook is in the Southern Ocean on a 51-day expedition to look at deep water mixing in this turbulent ocean.

Two young scientists aboard, Alex Brearley and Katy Sheen, are running an expedition blog from the ship at dimesuk3.blogspot.com.

The expedition, led by Alberto Naveira Garabato, continues work that began three years ago when a man-made tracer was released in the South East Pacific Ocean at a depth of 1500 metres. The scientists will be measuring how far and deep it has travelled, indicating the rate of horizontal and vertical mixing between different water layers.

“The Southern Ocean is the main place in the global ocean where water masses get exchanged between the surface and the deep ocean floor, carrying with them heat, carbon and nutrients. The eddies and currents in the Southern Ocean play a crucial role in the global circulation and even have an effect as far away as the North Atlantic” said Dr Naveira Garabato, who part of the University of Southampton Ocean and Earth School which is based at the National Oceanography Centre.

The tracer was released into the Antarctic Circumpolar Current – the strongest of the world’s ocean currents – two years ago by an American team. The man-made tracer, trifluoromethyl sulphur pentafluoride (CF3SF5) is detectable in minute concentrations. It will remain in the ocean for decades until it escapes through the sea surface.

During this expedition the scientists will measure the intensity of turbulence across the Scotia Sea with specialized, free-fall turbulent profilers. These instruments will help explain the processes that cause mixing in the deep Southern Ocean.

There are several reasons why mixing in the Southern Ocean is of interest to the scientists. As well as heat exchange between the oceans, this mixing brings nutrients from the deep ocean to the surface – nutrients needed by phytoplankton. In addition to being the base of the ocean food chain, phytoplankton plays a key role in the carbon cycle – it removes the carbon dioxide generated by burning fossil fuel carbons from the atmosphere to the deep ocean. Ocean mixing also affects the global concentration of atmospheric CO2 as it is sensitive to the rate at which this exchange happens. Measuring all these factors will help quantify the rate of climate change.

Later in the voyage, the team will recover a cluster of moorings in Drake Passage. For the past two years these instruments have been measuring the small-scale flows that are believed to cause mixing in the deep Southern Ocean.

Drake Passage is the stretch of water from the tip of Chile to the Antarctica Peninsula. Here, the world’s largest current, the Antarctic Circumpolar Current: ACC, races around the Antarctic continent driven by strong westerly winds. As there is no land to interrupt its flow, the current can transport around 135 million tonnes of ocean a second through Drake Passage. The ACC links the Pacific, Indian and Atlantic Ocean basins. Because it exchanges heat between the world’s oceans, the ACC current has a direct affect on the world’s climate.

Drake Passage acts as a choke point as the current is forced through this relatively narrow gap of around of 500 miles. It is an ideal section of the ocean to measure and has been revealing information about the physics – hydrography – of the Southern Ocean.

The expedition is funded by the UK’s Natural Environment Research Council and the American National Science Foundation (NSF) and is part of the DIMES project consortium. (DIMES, the Diapycnal and Isopycnal Mixing Experiment in the Southern Ocean) Isopycnal means approximately horizontal mixing – along surfaces of constant seawater density, diapycnal means approximately vertical mixing – across surfaces of constant seawater density. The experiment aims to determine how much of each is involved in returning the deep water that sinks in the North Atlantic to the ocean surface.