Biodiversity loss from Deep-sea mining will be unavoidable 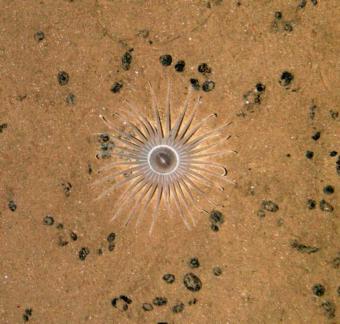 Biodiversity losses from deep-sea mining are unavoidable and possibly irrevocable, an international team of 15 marine scientists and legal scholars argue in a letter published today in the journal Nature Geoscience.

The experts say the International Seabed Authority, responsible under for regulating undersea mining in areas outside national jurisdiction, must recognize this risk and communicate it clearly to international governments and the public. This will enable informed discussions as to whether deep seabed mining should proceed and if so, what standards and safeguards should be put into place to minimize this biodiversity loss.

Dr Daniel Jones, one of the authors from the National Oceanography Centre (NOC), said “Deep-sea mining for important metal resources comes at an environmental cost. We argue that offsetting the impacts of biodiversity loss, a management technique used for land-based mining, is not appropriate for the deep-sea. Ecological restoration may also be extremely challenging. Instead, focus should be placed on avoiding and minimizing impacts if we want to reduce biodiversity loss.”

Industry estimates that billions of tonnes of manganese, copper, nickel and cobalt lie on or beneath the seafloor. Demand for these resources, many of which are used in the manufacture of clean technologies, such as wind turbines and hybrid cars, are set to increase. Alternative options for obtaining these resources, such as recycling, substitution and cleaning up mining operations on land, have yet to be fully explored.

“There is tremendous uncertainty about ecological responses to deep-sea mining. Responsible mining needs to rely on environmental management actions that will protect deep-sea biodiversity and not on actions that are unproven or unreasonable,” says Cindy L. van Dover, Harvey W. Smith Professor of Biological Oceanography at Duke University’s Nicholas School of the Environment.

Deep-sea mining has not yet begun, but there has been an increase in the number of applications for mining contracts. In 2001, there were just six deep-sea mineral exploration contracts, by the end of 2017 there will be a total of twenty seven projects. This includes seventeen contracts on polymetallic nodules in the Pacific’s Clarion Clipperton Zone. International scientists, including Dr Daniel Jones from the NOC, have recently shown impacts of deep-sea disturbances in this area are particularly long lived. The likelihood of future deep-sea mining underlines the importance of understanding the ecosystems that it may impact.

“The argument that you can compensate for the loss of biological diversity in the deep sea with gains in diversity elsewhere is so ambiguous as to be scientifically meaningless,” writes Professor Craig Smith, at the University of Hawaii, a co-author of the correspondence.

Deep-sea scientists and legal experts from the United Kingdom, the United States, Mexico, France, the Netherlands, Poland and Australia co-wrote the peer-reviewed correspondence with van Dover and Jones.

They are: J.A. Ardron of the University of Southampton; M. Gianni of the Deep-Sea Conservation Coalition; K.M. Gjerde of Wycliffe Management and the IUCN Global Marine and Polar Programme; A. Jaeckel of Macquarie University; L.A. Levin of Scripps Institution of Oceanography; H. Niner of University College London; L. Pendleton and P.J. Turner, of Duke University; C.R. Smith and L. Watling of the University of Hawaii at Manoa; T. Thiele of the London School of Economics; Elva Escobar of the National Autonomous University of Mexico; and P.P.E. Weaver of Seascape Consultants.

This forms part of the NOC’s on-going research in this area, which aims to provide the best possible evidence to inform the decisions of policy makers.