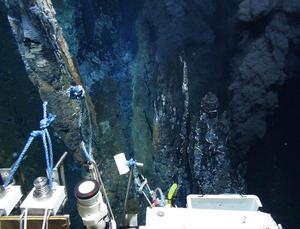 The BBC’s Science Editor, David Shukman, is aboard the Royal Research Ship James Cook as scientists from the National Oceanography Centre, Southampton, explore the deepest hydrothermal vents yet discovered on the planet, in the Cayman Trough beneath the Caribbean Sea.

And you can see David’s latest updates, live from the ship, on television news bulletins across the BBC’s channels throughout today (Thursday 21 February).

Back in 2010, researchers from NOC and the University of Southampton discovered what were then believed to be the world’s deepest and hottest volcanic vents.

The new team, led by the University’s Dr Jon Copley, returned to the area with high definition cameras and sampling equipment to investigate the vents, named the Beebe Hydrothermal Vent Field, more closely. They have now come across a further set located even deeper at 4,968 metres, or almost three miles beneath the ocean surface.

The Mid-Cayman Rise is the deepest known site of volcanic activity, reaching to depths of around 6,000 metres. This has implications for the physics and chemistry of the hydrothermal fluids emitted by the vents, and in turn, the organisms that use chemosynthetic energy sources.

The vents are located in an isolated trough in the Caribbean. Interestingly for the scientists, the area was linked to the Pacific Ocean before the closure of the Isthmus of Panama some three million years ago. The team is using the deep-diving remotely operated vehicle Isis to investigate the communities hosted by the vents. Isis has been designed to work to depths down to 6,500 metres.

A member of the onboard Geo-team, Matt Hodgkinson, of University of Southampton Ocean and Earth Science, which is based at the National Oceanography Centre Southampton, blogged: “We are studying the Beebe site because it is a natural laboratory in which to study the effects of temperature and pressure on the composition of hydrothermal mineral deposits. Studying modern day hydrothermal systems like the Beebe Field allows us better to understand the formation of land-based ore deposits from which humankind gets all its essential metals.”

The expedition is funded by NOC’s owner, the Natural Environment Research Council (NERC). NOC provides the Royal Research Ships James Cook and Discovery to the UK marine science community on behalf of NERC.