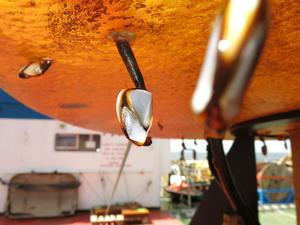 The type and size of barnacles on the Malaysian Airways MH370 flight debris could provide clues to the path it took through the Indian Ocean, according to researchers at the National Oceanography Centre (NOC).

The Indian Ocean contains a mixture of cold and warm waters, with different barnacle species living in each. The speculated crash site, in the South East Indian Ocean, spans a junction between the habitat of two species. One is the sub-Antarctic Lepas australis, and the other is the tropical and subtropical Lepas anatifera.

Professor Richard Lampitt, from the NOC, said “The crucial analysis to be done now is to determine the species of all of the barnacles on the wreckage. In addition, the size of each specimen should be noted as it is possible that the larger and older specimens will have settled when the wreckage was in a different region.”

In addition, the chemical composition of barnacles can provide clues to the path of the plane debris because the concentration and ratios of some naturally occurring trace elements will vary from place to place. Furthermore, the DNA of individual barnacles could narrow the path area even further.

All this information could help give confidence to the potential debris paths inferred by models of surface currents that are being analysed by researchers at the NOC.

Professor Lampitt added “Judging from photographs I have seen of the plane wreckage, the size of the barnacles suggests that they may have been in the water for more than a year. I am basing this on my observations of barnacle growth on scientific research equipment that the NOC deploys and recovers from the ocean once every twelve months.”

This deployment of equipment takes place at the Porcupine Abyssal Plain sustained ocean observatory, which is five hundred miles to the Southwest of the UK, as part of the NOC’s long-term observation of this area.